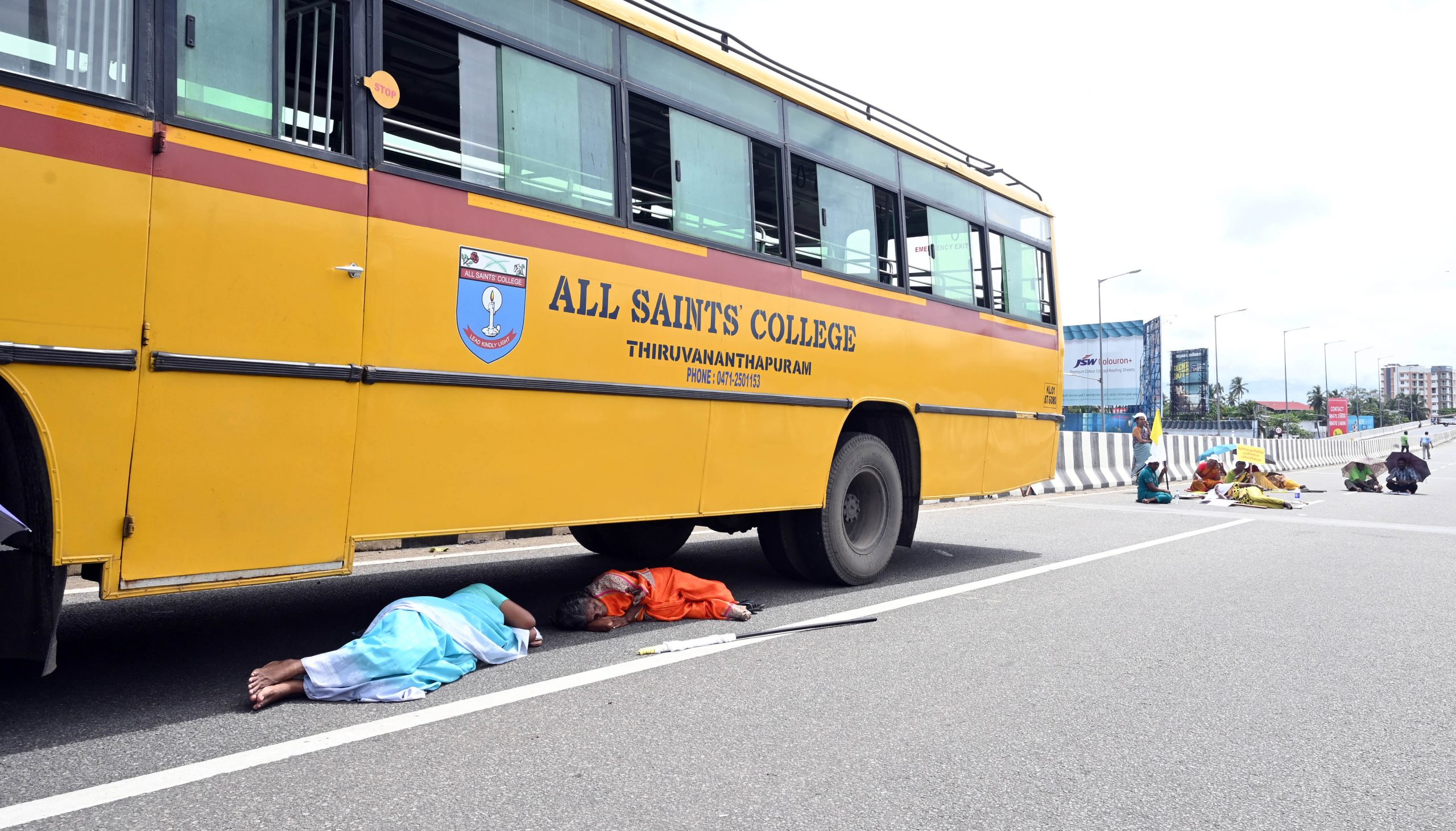 Thiruvananthapuram (VSK). The Latin Catholic Church-sponsored agitations against the construction of Vizhinjam Port blocked the roads resulting in the blockade of the road transport system in Thiruvananthapuram. The agitation against the Kerala High Court order violated all rules. But the police remained mute spectators. High Court had asked the state government to ensure the facilities for the builders to go ahead with the construction activities.

The agitators made the people captives. They blocked even ambulances and Fire Brigade vehicles. Several air passengers missed their flights as they could not reach the airport on time. The Action Council, controlled by the Latin Catholic Church, carried out the road blockade on October 17 pressing Adani Group to stop the port construction. The blockade was carried out at six points including national highway. They started it very much in the morning. Hundreds of people, including women and old folks were in the roads to participate in the agitation. They put country boats on board the lorries and tied them together and put them in the middle of the roads and blocked them. It resulted in the total road blockade even in the state capital city of Thiruvananthapuram. Even two wheelers were not allowed to move. Ambulances with patients on board were stopped. Therefore, they were rerouted. Medical College-bound patients were sent back. The agitators stopped All Saints College’s bus; women agitators lay down under the vehicle and in front of the tyres. Students begged them to let them go since they had to take examination in the college. They all fell on deaf ears. Not only that they uttered all sorts of obscene abuses. And, students had to walk several kilometres to reach their college.

A section of the agitators blocked the highway leading to the Thiruvananthapuram airport. Despite the passengers’ repeated requests, agitators did not allow them to proceed hence they fell into hot soup. Seventy passengers missed their flights as they could not reach there on time. Some of them were in dilemma in view of the expiry of their VISAs. Some bought fresh tickets and flew to their work. Due to Deepawali, ticket fares were doubled. But some people had no other alternative to protect their jobs. They were seen running to the airport carrying their luggage. Even Indian Air Force vehicles were blocked hence they were rerouted.

It is to be remembered that Kerala High Court order prevails against the Vizhinjam Port agitation. Even District Collector had issued an order banning the blockade of yesterday, October 17. But Policemen were seen having chitchats with the agitations at several points. Police did not take action to reroute the vehicles or facilitate a parallel route. Senior police officers were shutting their eyes to the violations of the rules, orders of Kerala High Court and Thiruvananthapuram District Collector. In another words, they were supporting them.

It looks like ruling CPM-led Left Democratic Front appeases the Church, thanks to the minority vote bank politics. No other justification round the corner for the failure of the authorities in handling the traffic anarchy the capital city underwent on October 17.

Picture – Agitators lying under the college vehicle with students on board during the blockade in protest against the Vizhinjam Port construction.