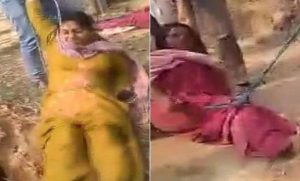 Kolkata (VSK). In a shocking incident, a primary school teacher was assaulted, tied with ropes and dragged by Trinamool Congress (TMC) leader, Amal Sarkar, and his men. The teacher’s sister was also thrashed and dragged by the TMC goons. The incident occurred at South Dinajpur district, which is around 400 km from Kolkata. Amal Sarkar is still on the run while his two accomplices have been arrested. The TMC has suspended the leader for the shameful act.

The video of the incident, which was widely shared on social media, shows teacher being beaten, thrown to the ground. A man ties a rope around her knees and another group of people drag her by her arms over the earthen road. Her older sister, who happened to be on the spot, shouts at the men. She too is shoved to the ground and dragged to where her sister is seen lying.

The sisters, who are in their late 20s, objected to a road construction which would mean giving up their land. Earlier, they had agreed for a 12 feet wide road in front of their house. Later, they were told that the width would be 24 feet which meant that the sisters would lose much more of their land.

The problem began when the sisters objected to taking over their land without their permission.

The men led by Amal Sarkar came to the women’s house and beat them up for refusing to give up their land. One of the sisters, who is a primary teacher, was then tied up with ropes and dragged on the ground by the TMC goons.

They then assaulted the other woman and she too was dragged on the ground. The video of the assault is being spread in social media and TMC is under heavy criticism for allowing such violence under its leadership.