Addressing the reporters after watching the film, he said, “After a long time, the film looks at history from the Indian point of view.”

“This film is based on facts. The message that the film gives is needed by the country at the moment. Till now, we had been reading history that has been written by others. Now, we are looking at history from the Indian point of view,” he said.

He said that as a viewer, he could say that the film is magnificent, and the message it wanted to convey has been put across well without compromise.

“To protect the honour of India, Indians will have to fight together in the same way as the mighty heroes shown in this film”.

UP CM Yogi Adityanath on Thursday declared that the movie, which was released on Friday, will be tax-free in the state. Several other BJP-ruled states, including Uttarakhand and Madhya Pradesh, have made the movie tax free in the state. 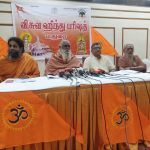