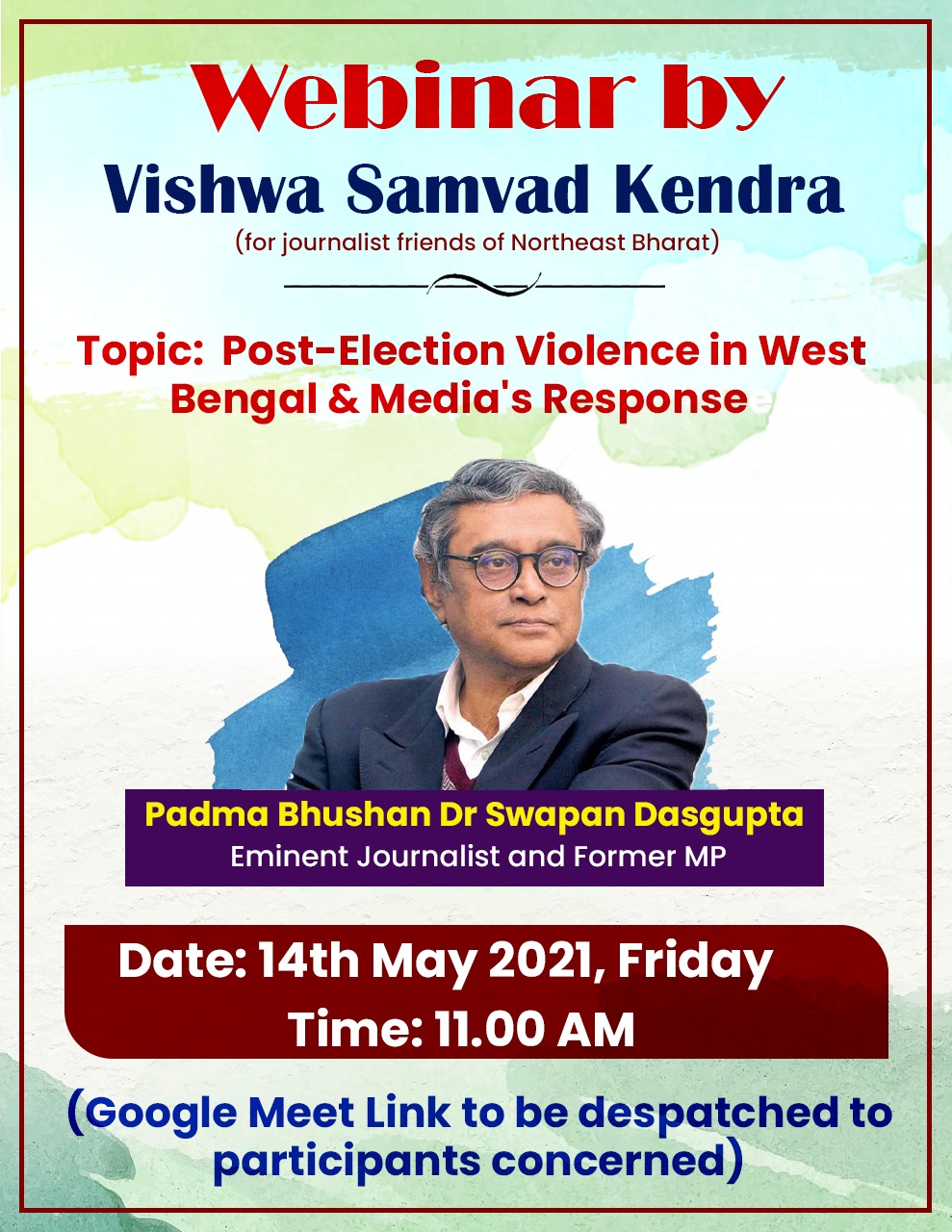 Guwahati. The incidents of post-poll violence erupted in West Bengal brings a grim reminder for Bharat (India) and if it is not contained duly gloomy days are ahead of the great country, commented Dr. Swapan Dasgupta, an award winning journalist and social thinker.

Attending a webinar, organized by Vishwa Samvad Kendra on 14 May 2021, Padma Bhusan Dasgupta also condemned biased roles played by the State government in Kolkata. Speaking over the topic ‘Post-Election Violence in West Bengal and Media’s Response’, Dasgupta also criticized the unprofessional attitude adopted by the mainstream media outlets of the Bangladesh bordering State and he remained unhappy with the civil society groups as those failed to maintain neutral impressions, thus losing their expected efficacies.

“Poll related violence is not alien to West Bengal as the tendency was grown since the Left parties started ruling the State. But this time, the incidents of violence were limited because of strict measures taken by the Election Commission of India.

However, the post-poll violence broke all records,” commented the former Rajya Sabha member.

Dasgupta, who fought the recently concluded WB legislative assembly elections as a Bhartiya Janata Party (BJP) candidate from Tarakeswar seat, claimed that a large number workers of All India Trinamool Congress (AITC) began violent activities since the vote count day (2 May). A keen observer of political issues in the country, Dasgupta asserted that once the Trinamool members came to realize their electoral win, they became unruly over BJP workers and even supporters. “Trinamool members attacked not only the individuals but also their residences and other properties. The unruly members were not satisfied with the idea of teaching a lesson to BJP supporters but to completely destroy their livelihood so that they cannot dare to oppose AITC chief Mamata Banerjee and her clout anymore,” stated Dasgupta.
He narrated the horrible story relating to thousands of Bengali families uprated from their villages as many of them entered into Assam and Orissa. According to Dasgupta, nearly one hundred thousand people were affected by the ongoing violence where at least 14 persons lost their lives to the hooliganism unleashed by Trinamool members. “What is shocking and a matter of serious concern that as the violence erupted the miscreants took advantages of the situation and looted the BJP supporters. In many places, it ended up on communal violence exploded between Muslims and Hindu residents,” pointed out Dasgupta expressing his annoyances that the Bengal police and administration continue to put deaf ear to the disturbing trend.

A sensible journalist by passion, Dasgupta also expressed anguish that most of the Bengal media houses avoided reporting those incidents authentically. On the other hand, he added, social media space flooded with inputs relating the post-poll violence only spoiled the image of West Bengal, which was once known as a land of intellectuals. Finally the articulate speaker called on the participating over 55 working journalists from northeast India to remain alert over the impact of Bengal violence that has attained communal across the country and help the common people to understand the future course of anti-national elements so that every sensitive Indian can stand for a peaceful, progressive and development oriented nation.