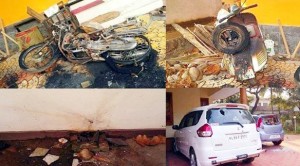 Kannur. Payyannur in Kerala’s Kannur district, known for its history of murderous political violence, witnessed escalation in bloodshed on Saturday, December 7 night with the houses of seven BJP-RSS leaders and workers coming under bomb attacks by CPI(M) cadres, triggering panic across the district about the possibility of the spread of violence.

The houses of seven BJP-RSS men, including BJP district Yuva Morcha president KP Arunkumar and district RSS Karyavahak Rajesh, came under attack late on Saturday. Most of the incidents occurred in areas coming under the Payyannur municipality and Kankol, Alapadamba and Ramanthali panchayats, police said.

They said that several vehicles, including cars and motorbikes, had been damaged in the attacks. The incidents occurred despite the deployment of a large number of police personnel in all sensitive areas where tension has been prevailing since December 1, the 15th anniversary of the Balidan (martyrdom) of State Yuva Morcha vice-president  KT Jayakrishnan.

Tension had been prevailing in the Payyannur municipal area since Saturday afternoon following the attack on BJP workers’ vehicles parked in the town.

Police officials said that the nature of the attack on Saturday-Sunday night indicated that the current phase of violence could continue at least for some days. “It has a kind of an attack and counter-attack pattern, which always happens in Kannur at the start of prolonged violence. We are doing our best to keep the situation under control,” said a police officer.

The current phase of violence had started in the first week of November, more than two months after the brutal murder of district RSS Sharirik Shikshan Pramukh Elanthottathil Manoj on September 1 by a Marxist killer gang at Kathiroor, Thalassery. The CBI is currently carrying out an investigation into the murder. BJP leaders say that it was the CPI(M), which started the violence as it had some problem in the BJP’s selection of Payyannur — considered as an area with high concentration of Marxists — as the venue for the Jayakrishnan Balidan anniversary. The CPI(M) might be viewing this as a move of the BJP to make inroads into the Marxist stronghold, they say.

The people of Kannur are now worried that the violence, so far confined to Payyannur and certain pockets in the Thalassery area, could worsen and spread to other regions especially in the context of the preparations of the political parties for the local bodies elections due in September next.

“Violence has been occurring in parts of Thalassery for the past one month and these have now spread to Payyannur. The problem with these ‘minor’ incidents is that the situation may worsen anytime. We don’t want a repeat of that situation where killings used to be counted like on a soccer scoreboard,” said Sasidharan, a retired government employee in Palayad, Thalassery. 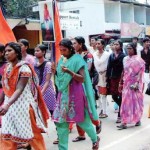