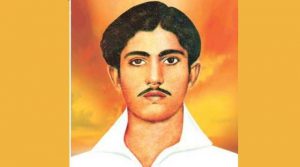 In October 1942, Hemu Kalani came to know that British troops and ammunition would be arriving in Sindh by a train passing through his town. He decided to derail the train by removing the fishplates from the railway tracks. He and his friends were severely handicapped in not having any tools for loosening the nuts and bolts and for removing the fishplates. However, before they could complete the job, they were spotted by the British troops and Hemu, in his effort to save his friends, was caught.

After a prolonged trial, Martial law found him guilty of treason against the government and sentenced him to life imprisonment. He was tortured brutally by police to give out the names of his friends but he refused to do so he took the entire blame on himself. He told the police and the court that if it was right for the foreign rulers to crush the freedom struggle by resorting to arms and ammunition, he, on his par, was fully justified in attempting to destroy those very arms and ammunition.

The Martial Court of Sukkur forwarded its judgment of life imprisonment for the approval of Col. Richardson, the Chief Officer at the Head office at Hyderabad (Sindh). He was strongly against the revolutionaries and could not digest a young boy was challenging the British authority. With strong feeling of revenge, he converted the life imprisonment of Hemu Kalani into death sentence.