New Delhi. Group of intellectuals and academicians demanded to bring about an anti-conversion law to stop unethical, illegal conversions which are on account of allurement or force.

Monika Arora, it’s Convener said in a press release, “We also appeal to the Government of Bharat to investigate foreign contributions which are widely suspected to be funding the missionary activities especially in the north-east regions of the country.”

The Group also appeal to the union Government to investigate into the large scale conversions which have happened in the country, especially in the north eastern states since independence which has led to demographic changes in the region.

These measures are extremely important to maintain public peace, tranquility and public order in the country and to uphold the rule of law which is essential for the development of the nation, has been stated in the release.

The Group strongly support the freedom of religion in Bharat which is a fundamental right guaranteed by the Constitution of the country  which gives its citizen’s freedom of conscience and freedom to profess, practice and propagate religion of their choice. This is further subjected to public order, morality and health.

Country has witnessed public disorder and immoral activities on account of conversion of people by allurement, threat, undue influence and coercion. The In 1977, the apex court held in Stainislaus vs. State of Madhya Pradesh that in the name of propagation, no one has a right to convert a person to another religion under pressure or inducement.

Since independence, the country has witnessed large foreign funding in the name of humanitarian aid which is used for converting people. In fact, the Govt. in Madhya Pradesh and Orissa passed anti-conversion laws in 1960s and the govt. in Himachal Pradesh under Shri Virbhadra Singh a few years back passed a similar anti-conversion law to counter the threat of conversion of people by Christian missionaries.

Such conversions by allurement or threat leads to public disorder and are done by immoral, unethical means. The father of the nation Mahatma Gandhi stated that the Christian missionaries should be ashamed of their acts of converting Hindus to Christianity by giving them one bowl of rice.

Mahatma Gandhi reconverted his son to Hinduism who had adopted Islam. “We condemn all forms of conversions which are done with malafide intentions, allurement, force, threat or misrepresentation. Development of a human being in particular and the nation in general is possible if people are freely allowed to profess the religion of their own choice without any undue pressure from any side.” 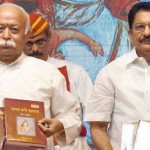