Guwahati. The National Security Guard (NSG), the elite counter-terrorism and special operations force, will hold its first mock drill in Assam, which is being seen as a “vulnerable” state for terrorist activities, next week.

A senior NSG official, who is on a recce to the state, told that around 50 personnel from NSG’s Calcutta hub would conduct the three-day drill, which will also involve state police personnel, in Guwahati from May 12.

As of now, four sites have been identified for the drill. They include IIT Guwahati, Royal Global School, Assam secretariat and Guwahati refinery. The importance and vulnerability of the sites have guided their choice.

“The mock drill will be conducted only at night. The exercise will help us respond to a crisis situation in our area of operation promptly and familiarise our personnel with important and vulnerable installations and areas under the Calcutta hub. Assam is a sensitive state vis-à-vis terror acts,” the official said.

Apart from the northeastern states, the Calcutta unit of the NSG looks after Sikkim, Bihar, Odisha and Jharkhand. The Delhi-headquartered NSG has hubs in Calcutta, Hyderabad, Chennai and Mumbai. There were also efforts to set up a hub in Guwahati.

The drill comes within months of J.N. Choudhury, former Assam DGP, taking over as the director-general of the crack security outfit.

Although the drill will be the first of its kind, there are around 50 NSG personnel in Guwahati who provide security to chief minister Tarun Gogoi and his immediate predecessor Prafulla Kumar Mahanta. 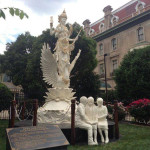