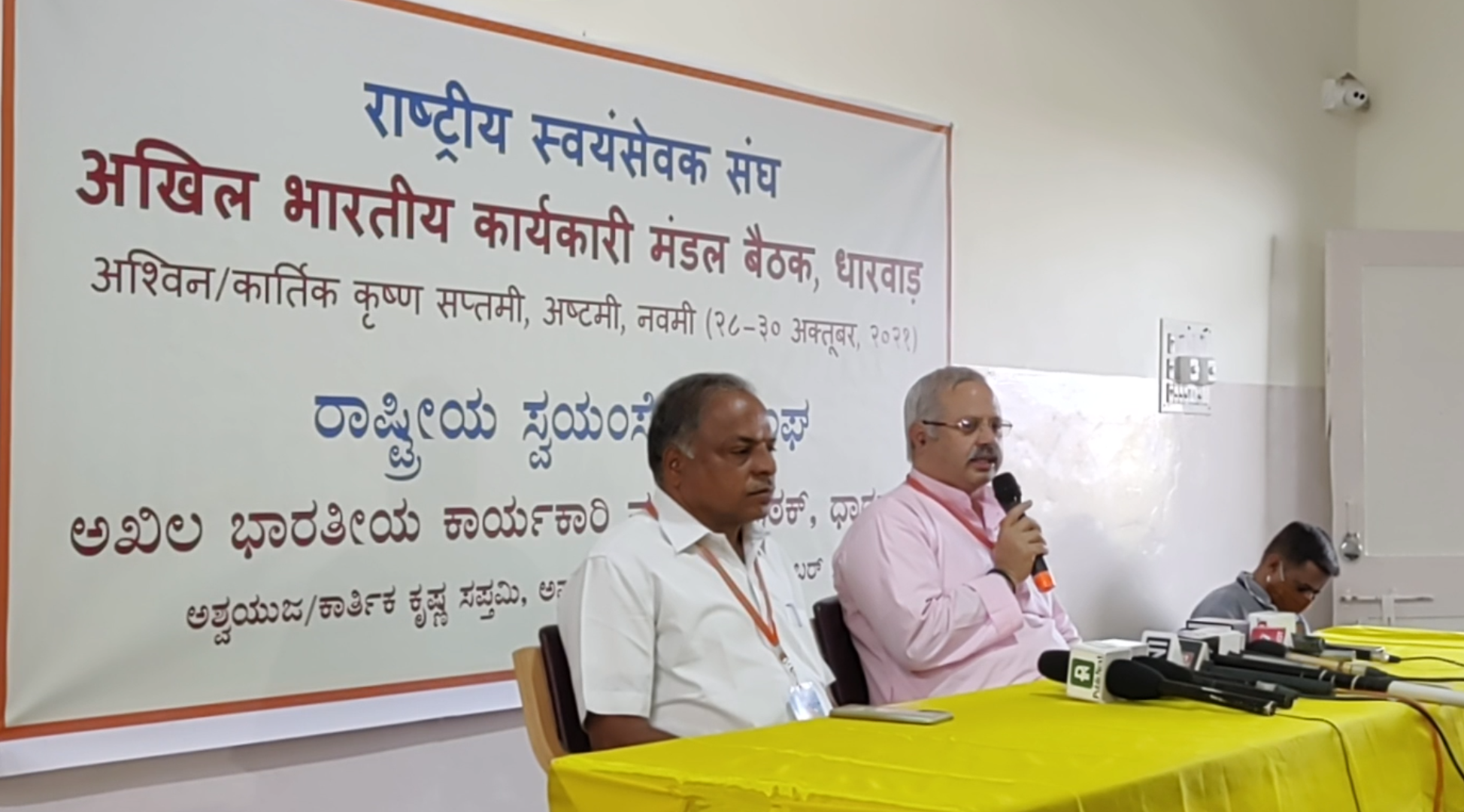 Atrocities on Hindus in Bangladesh and programs of Amrit mahotsava of  Bharatiya Independence to be discussed.

Dharwad, 26th October. Rashtriya Swayamsevak Sangh has trained over 10 lakh karyakartas to deal with the speculated third wave of corona in the country said Sunil Ambekar, Akhil Bharatiya Prachar Pramukh. To deal with the third wave, a special training of workers was planned in the meeting of Prant Pracharaks in the month of July and training was held at more than 1.5 lakh places throughout the country. It is hoped that there is no third wave, but still there will be discussion about the preparation along with the review of the situation in the karyakari mandal baithak.

Rashtriya Swayamsevak Sangh’s Akhil Bharatiya Karyakari Mandal meeting has been organized from 28 October to 30 October at Rashtraotthana Vidya Kendra, Dharwad. In the press conference held at the meeting place, Sunil Ambekar was sharing information regarding the topics that will be discussed in the meeting of the Karyakari Mandal.

The country is celebrating the Amrit Mahotsav on the occasion of 75 years of independence. There will be many programs in the country on this occasion. There will also be a discussion about the awakening of the country’s “Swa”, and also bring forth the information about unknown or little known, unsung freedom fighters.

He further said that RSS organizes such meetings twice a year. Akhil Bharatiya Pratinidhi Sabha meeting is held in March, While the meeting of the Karyakari Mandal takes place between Dussehra and Deepawali. About 350 members are expected in the meeting. Prant and Kshetra Sanghchalaks, Pracharaks, Karyavahs, members of Akhil Bharatiya Karyakari and Organising Secretaries of some organizations are expected in the meeting.

From last year till July, all the meetings were conducted through online mode or with less number of physical attendees. Now for the first time the meeting of the Karyakari Mandal is being held in full attendance. In the meeting of Pratinidhi Sabha, the planning with respect to work expansion is done in detail and the review of the work is done in this October meeting. In the meeting, along with the review, there will be a discussion regarding the expansion of the work. Along with this, there will also be a discussion about the development of Karyakartas also.

Sangh was established in 1925, and 100 years of the Sangh are going to be completed in 2025. In view of this a 3year work expansion detailed plan was done which is to be completed by 2024. This plan will also be discussed in detail in the meeting. There will also be a discussion about the programs to be held on the 400th birth anniversary of Shri Guru Tegh Bahadur ji in the Karyakari Mandal meeting.

The meeting will start on Thursday, October 28, at 09:00 at the Rashtrotthana  Vidya Kendra, Dharwad. Corona protocol will be followed during the meeting.