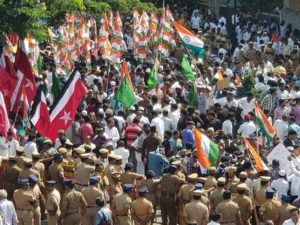 Tamil Nadu. In yet another incident of politicization of schools, police filed cases against Sacred Heart Senior Secondary school teachers Vasanthi, Muthuselvel for forcing the students to take part in an anti-CAA rally at Srivilliputhur. Hindu Munnani on hearing the rally, stormed the venue and fought with the police to stop the procession of students. After a marathon debate, the police filed FIR against the school teachers for taking part in the rally organized by DMK and its allies.

ŌĆ£Involving children forcibly in political rallies is highly condemnable and it is amount to brainwashing the young minds. The state government should derecognise the school. We have taken up the matter with the Education Minister Senkottaiyan who promised us that suitable action would be taken.ŌĆØ said BJP spokesman Narayanan Tirupathy.

The Madras High Court has issued notice to the State and Central government to reply to a petition filed seeking banning protests and demonstrations by Students all over the state.