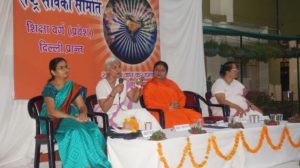 Addressing the gathering of trainees and their families, the main speaker Ms. Chandrakanta said that their effort was to make the trainees multi-talented. A woman educates two homes. Macaulay changed the Indian education system and we are still continuing with the same. To strengthen and integrate the society women must be made more cultured. She also emphasized that none listens to the weak and to make a society free from fear, the women must become strong. She also lauded Israel for organizing and creating a niche for itself. 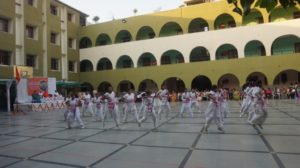 Rashtra Sevika Samiti is an 80 year old organization. It was founded by Lakshmi Bai Kelkar in Nagpur. The Samiti believes in an ideology of gender equality and works for physical, intellectual, and spiritual growth of women for their greater contribution in the family, society and the country. It also believes that women are the guiding force and set the direction of life. It undertakes a range of activities throughout the year and 52 such service activities are being run by the Samiti in the entire country.

11th June was the concluding day of a fortnight long camp. The participants stayed in the camp throughout the duration and were trained in various activities. This was an induction level camp for young women who will undergo further training in future. The young women, mostly in their early twenties, demonstrated of their proficiency in yoga, judo, karate, fighting with knives and swords. The participants clad in their uniform, called ‘Ganavesh’, also organized an impressive parade cum march past. Family members of the participating young women, members of the RSS and general public came to witness the closing ceremony and greeted and cheered the participants. Slogans of “Bharat Mata Ki Jai” filled the air.

A route march, called ‘Path Sanchalan’ was also held on 8th June in nearby localities and was much admired by the people. The march was conducted under guidance of Sadhwi Rama Bharti. The march was led by a young woman riding a horse, carrying a flag of their organization. It was followed by a jeep and other groups carrying lathis, band, knives, swords, participants in yoga and further followed by other groups riding scooters and cars. 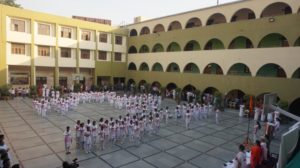 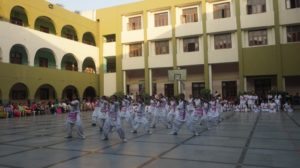 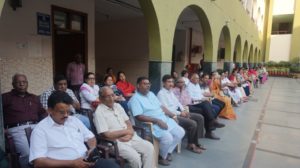 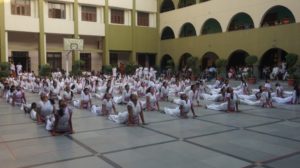 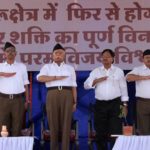