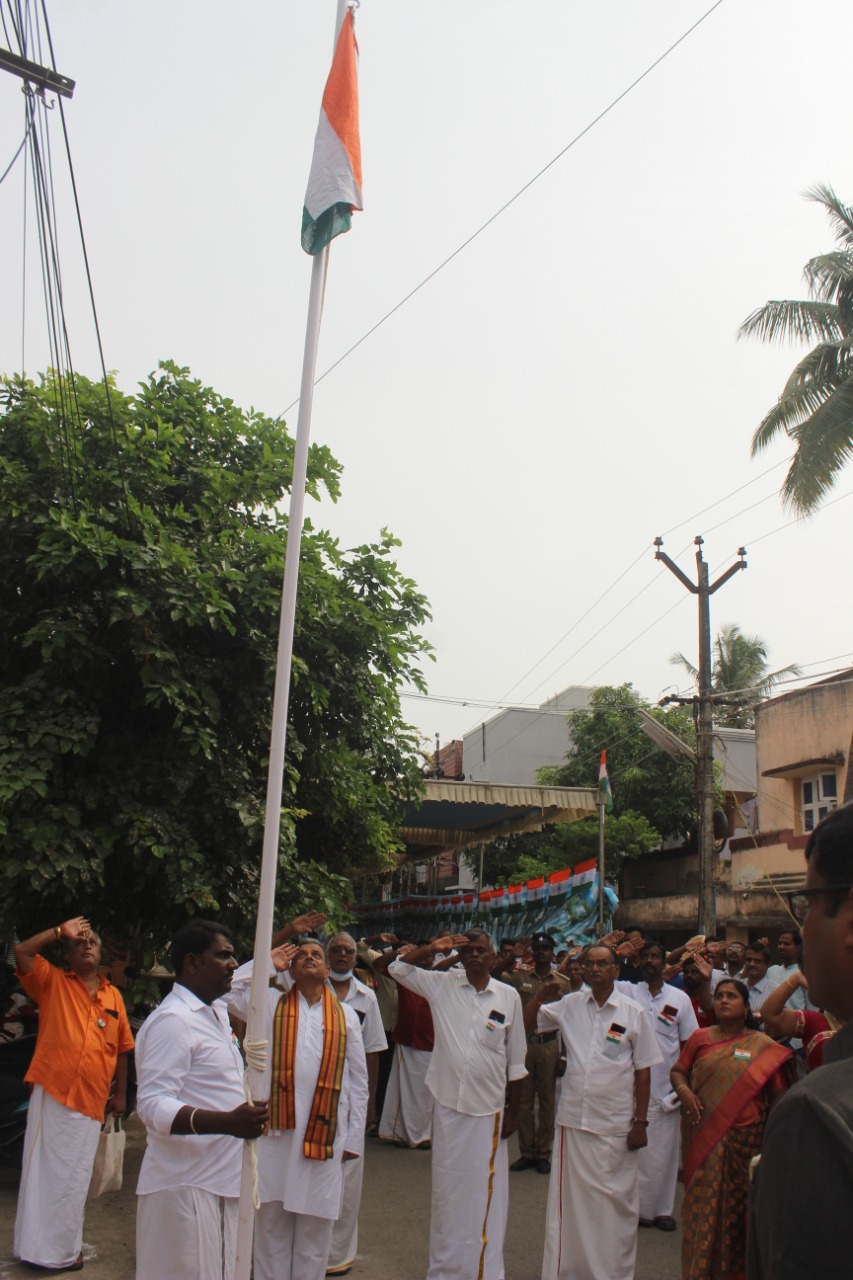 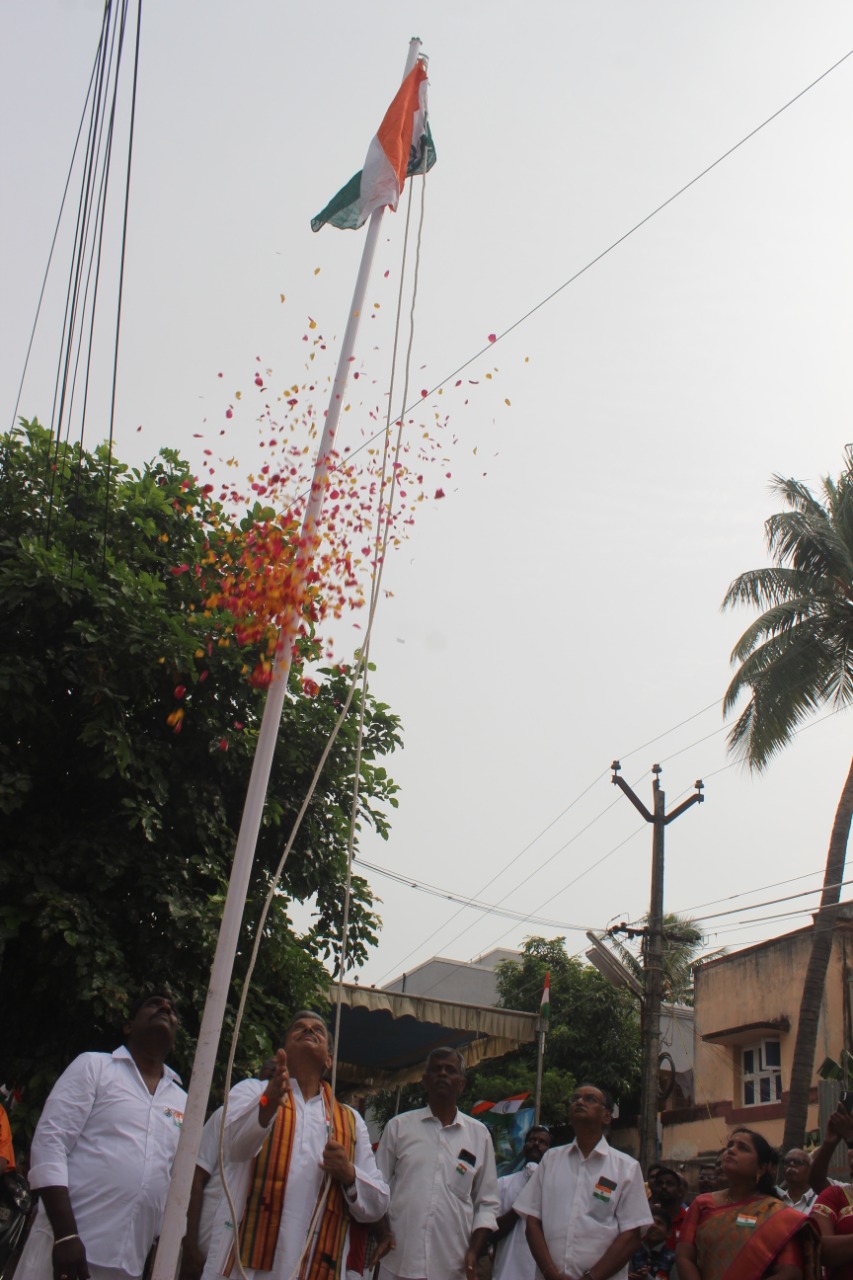 He expressed immense happiness in participating during the auspicious “Amrit Mahotsav” of this “Bharat’s Freedom” and hailed the Indians across the world, for enthusiastically celebrating “Amrit Mahotsav”. “Har Ghar Trianga”, viz.. Tricolor atop every house, every building, Govt. building, private corporates including temples and other places have created a nationwide movement of intent patriotism. Exchange of various ideas, videos, pictures in mainstream media and social media. He opined that, this has been so far unseen, unheard of enthusiasm in India’s Independent history and all are happy to participate in nationwide celebration.

President Draupadi Murmu Ji requested the citizens to remember our freedom fighters, especially tribals and those lived in hilly regions during her maiden address to the nation on the eve of Independence Day. Sarkaryavah also hailed Prime Minister’s Independence Day speech.

He elaborated on the freedom struggle and said, “Today we are all independent citizens of the great nation after one thousand years of struggle against invaders who came from different parts of the world and many of them ruled this nation for decades and centuries. We all know about the great struggle of our freedom, and freedom struggle was not limited to any single part or region. People belonging to various region and profession participated in the freedom struggle.

Today is the occasion to respectfully remember all people who participated in the great freedom struggle and express our heartful gratitude to them.

He praised the sacrifices of freedom fighters from Tamil Nadu namely viz.. 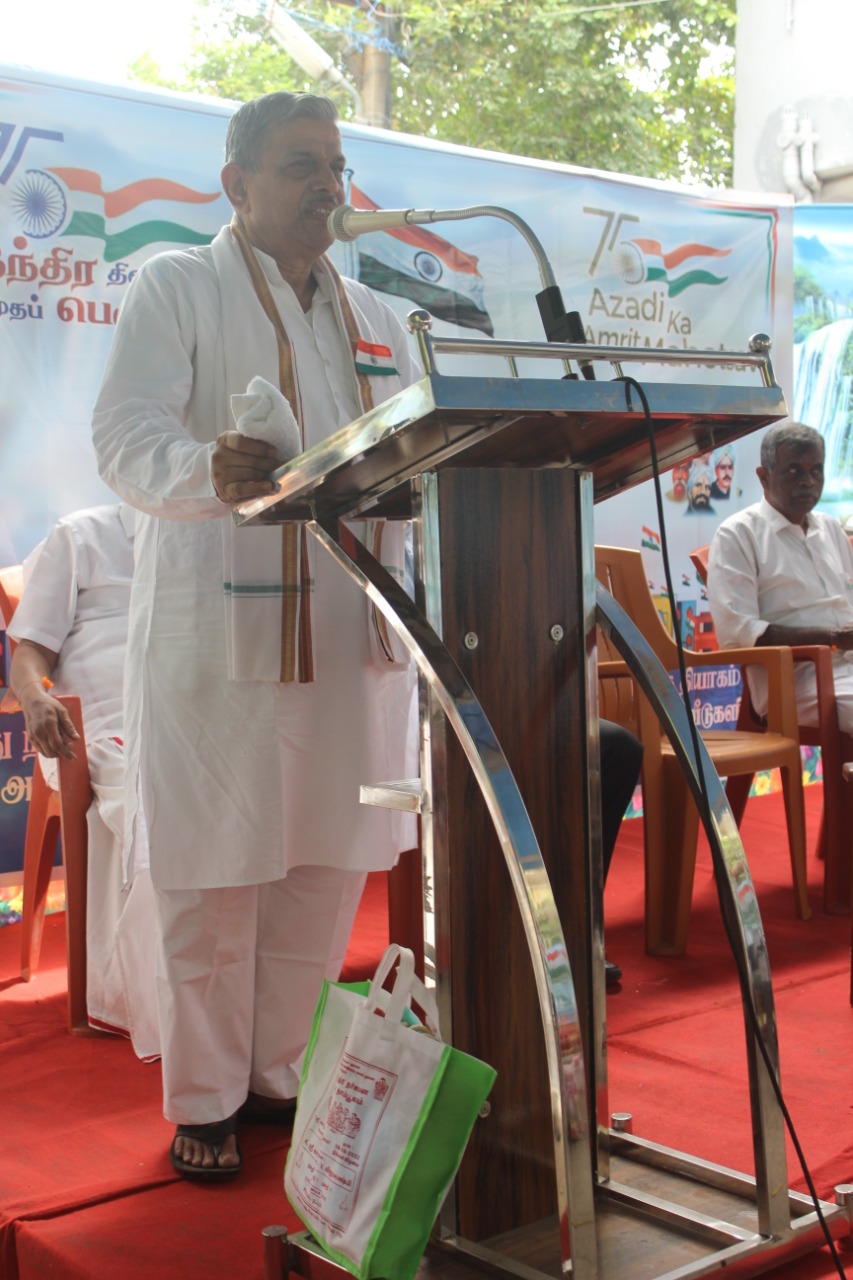 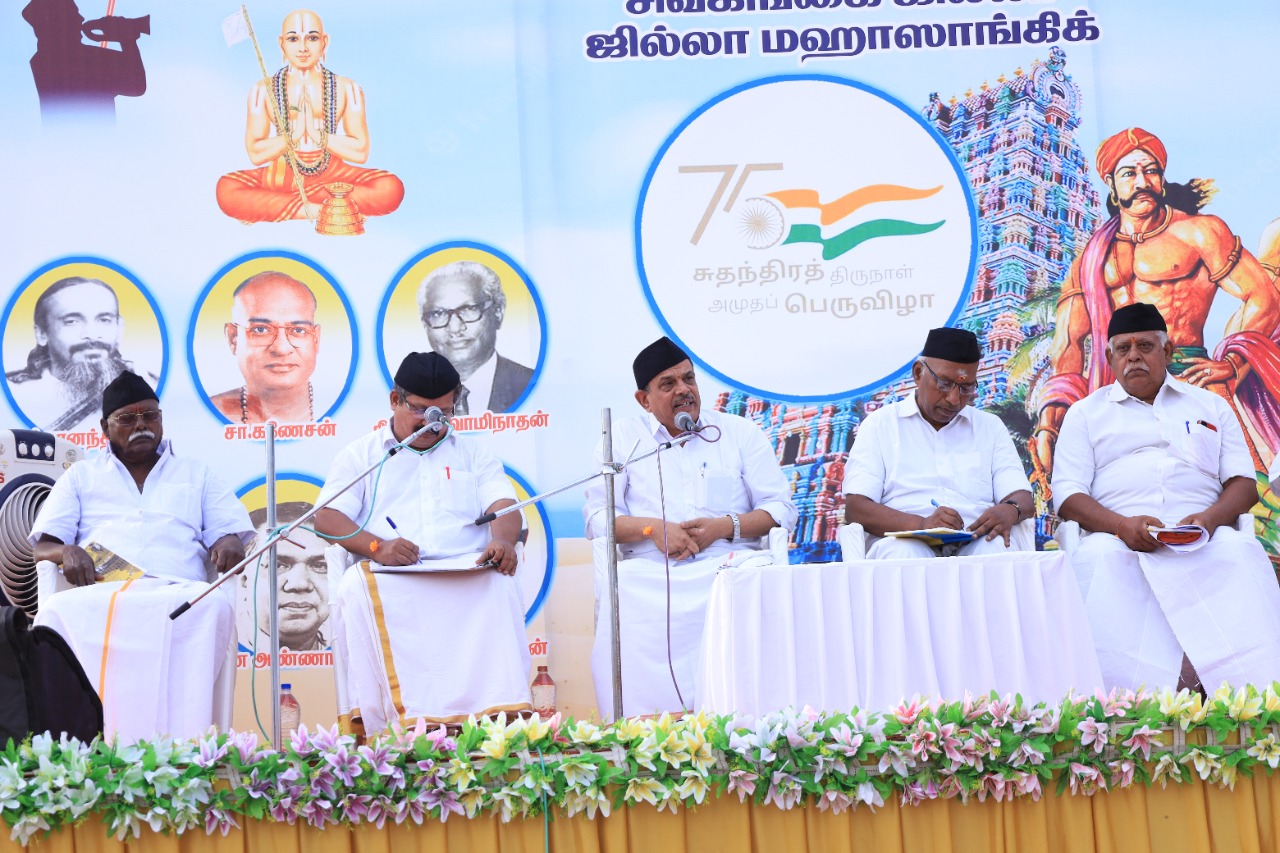 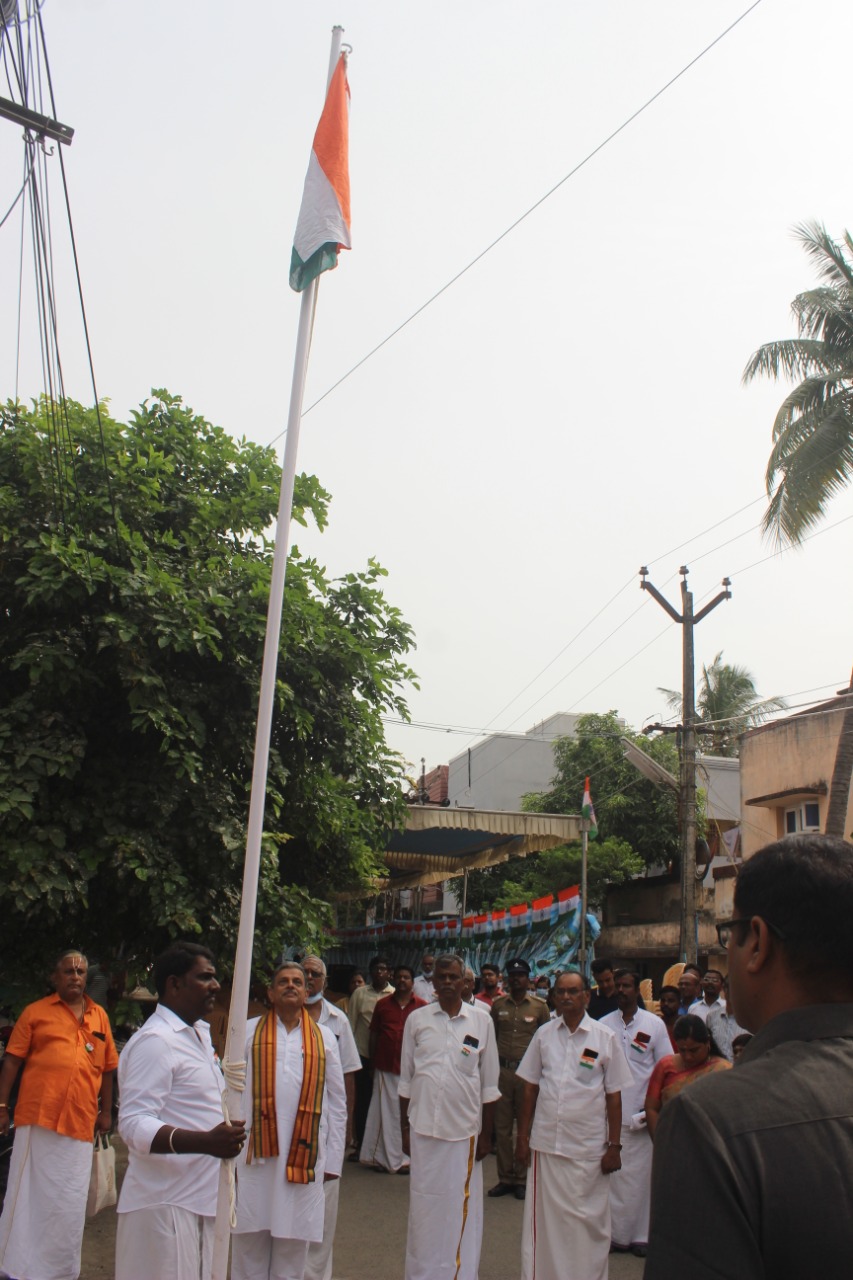 Velu Nachiyar, Kuyili, Shri Aurobindo and other freedom fighters. We must also remember all people who were inspired by Bala Gangadhar Tilak, Mahatma Gandhi, Aurobindo, Savarkar and participated in freedom struggle in Tamil Nadu.

He praised the country’s progress in the last 75 years. He proudly said, “Today Bharat is in a respectable and commendable position in the world. But the work is not over, the journey has not ended. All of must dedicate ourselves for the noble task for development of the country.

Present citizens should pass on the great dedication and sacrifices made by our forefathers, to our next generation, he said.

He praised citizens for making India a self-reliant, technologically advanced country. People have immensely contributed in IT sectors and our scientists not only developed satellites for the country but also for other nations. World has accepted Bharat’s Yoga and yoga has become a worldwide synonym. Now our Ayurveda, Family Systems, Human values and Culture, the great language sanskrit also has to be spread across world. People of Tamil Nadu are masters in the field of Art, culture and music and emphasized that art, culture and music of Bharat should be taken across globe and youngsters to shoulder the country’s progress.

Belonging to one great Bhartiya culture, there is so much diversity, the diversity is not difference. Democracy of this country is vibrant, divinity of this land is great, and it should be cherished.

“Bharat has many languages, different customs, so much diversity, we need to focus on the underlying unity. Many times, people fight in the name of language, rivers, customs, castes, community etc. These things will weaken our society if we continue to do this. To strengthen our society, we need to raise above these tendencies. Resolving to have One Bharat, One People, One Culture let us celebrate 75 years of independence with great fervour.