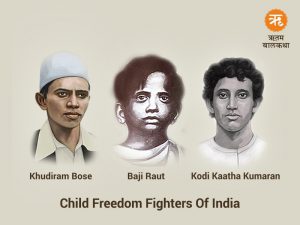 In the struggle for Freedom from the British, many gave up their lives. Among these were small children too. The story of their bravery is one which makes us feel pride on being the people of this land of Tyaagis (those who have sacrificed their lives). Let us look at 3 of these children and fill our hearts and minds with the courage that these children had.

He is the youngest of Martyrs of this land and he was just 12 years old when he gave up his life. Baji Rout was the youngest son of a boatman on the Brahmani river in Odisha. As an active member of the Banar Sena of Prajamandal (Party of People), he had volunteered to keep watch by the river at night. The British Police force ordered him to take them across the Brahmani river by his boat, on the night of 11 October 1938 at Nila kanthapur Ghat, Bhuban, Dhenkanal district. He refused and so he, along with two other boatmen, was shot by the ruthless British force.

Tirupur is a town near Coimbatore, Tamil Nadu and it was KumaranŌĆÖs home town. In 1932, Kumaran organised a protest march against the British. He was carrying the Indian National Flag, which was banned by the British. This enraged British officials who then began assaulting the protesters, including Kumaran, insisting him put the flag down.

Kumaran held on to the Indian Flag even after being repeatedly beaten. He was mortally wounded and even when he fell into a faint before dying, he clung on to the Indian flag ensuring it did not fall to the ground. This incident gained him the title Kodi Kaatha Kumaran – Kumaran, the saviour of the national flag.

He was just 18 years old, when he was sentenced to death for his role in the countryŌĆÖs freedom struggle. Magistrate Kingsford, the Chief Magistrate of Calcutta Presidency was known for passing harsh and cruel sentences on young political activists. He was also notorious for inflicting corporal punishment (beating with a cane) on them. In 1908, Khudiram Bose was appointed to kill Kingston, who was now the District Magistrate of Muzzafarpur.

On April 20, 1908, Bose threw a bomb at a carriage, believed to be carrying Kingsford, outside the European club. But unfortunately, the carriage was occupied by the wife and daughter of barrister Pringle Kennedy, a leading pleader at the Muzaffarpur Bar. An extra police force was deployed to find the perpetrator. Bose, in the meantime, had walked 25 miles and reached Vaini railway station. He was arrested by two officers there and hanged to death on August 11, 1908. His co-conspirator Prafulla Chaki committed suicide before being caught by the British. He walked to the gallows firmly and cheerfully and even smiled when the cap was drawn over his head. He kept saying ŌĆ£Vande MataramŌĆØ when he was caught and even in court during his trial. Such a brave lad ŌĆ” he knew no fear & he loved his country more than his life. And today we have people who are ashamed of saying ŌĆ£Vande MataramŌĆØ.