Following the incident, he was absconding.

A case has been registered under POCSO Act. He will be produced before the court after a medical examination. The inquiry report by the Child Welfare Committee was handed over to the police yesterday. 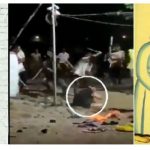