Bangaluru. The Central Government has appointed a Commission under the Chairmanship of former Chief Justice of India Shri K G Balakrishnan with the terms of reference including to examine.

2). Its implications to existing Schedule Caste

The notification appropriately notes that it shall require “extensive consultations”

The VHP reiterates that scheduled castes are the persons who have historically been deprived on the basis of their castes; while the Abrahamic religions claim to have no caste distinction amongst them and therefore SC reservation cannot be extended to them.

For this purpose, VHP shall actively participate in the consultation process before the said Commission to assist it into arriving at the appropriate findings.

In 1950, the Constitution (Scheduled Castes) Order was issued making it clear that only Hindu Scheduled Castes would get reservation facilities. Despite this, Christian missionaries and Islamic organizations have been making constant efforts for their irrational demands to extend this facility to converted SCs. We wouldn’t allow to snatch the constitutional rights of SCs, said Alok kumar, the central working president (VHP). The converted STs should also not be allowed to continue the rights of reservation guaranteed under the law to STs, he added.

While addressing a press conference in Bangaluru today he said that Dr Ambedkar and many Prime Ministers, including Pandit Jawaharlal Nehru, had not acceded the demand to extend benefits to converted SCs. Rajiv Gandhi, Deve Gowda and Manmohan Singh tried to accept this demand, but they had to back down due to the nationwide protests. The Sachar Committee in 2005 and the Ranganath Committee in 2009 had made some recommendations in this regard, but due to their self-contradictions and wrong methodologies, their recommendations could not be implemented.

Christian missionaries and Muslim leadership while claiming social equality in their religions and in the same breath raising this demand with great vigour is evidently self-contradictory.

The judiciary has also rejected their demand every time as illogical and unconstitutional. In the case of “Soosai Etc vs Union of India And Others” on 30th September, 1985, the Hon’ble Supreme Court had clearly directed that the Constitution (Scheduled Castes) Order, 1950 and the amendments made to it were constitutional and this reservation could be given to none else other than Hindu, Sikh and Buddhist Scheduled Castes. In the cases of R.C. Poudyal; Somnath Poudyal; Nandu Thapa; Roop Raj Rai, etc., these provisions of the Constitution (Scheduled Castes) Order, 1950 were considered appropriate and just, he said.

Due to the potential conversion surge and deluge, the peril of demographic alteration in many areas of Bharat will take a dire form. The consequences of demographic change hostile and ill-disposed to national interest are already obvious in many districts of Jammu & Kashmir, Kerala, Bengal, Northeast, Haryana, Uttar Pradesh, Bihar, etc. In those pockets, not only has religious intolerance increased, but also India’s identity and worldview and paradigm of ‘Sarv-Panth Samaadar Bhaav’ (‘mutual respect and harmony among all schools of religion’) has been diluted.

The rights of the Scheduled cast communities of Bharat (India) can’t be allowed to be snatched away by the converts. Backed by their money power, political influence and international support, they will lodge themselves in all areas of reservation and all those members of the scheduled caste communities for whom the provisions of reservations were made will be deprived of the facilities.

VHP would undertake a widespread public awareness campaign across the country to expose the conspiracies of providing reservations to the Scheduled Castes converts and the same available to the Scheduled Tribes converts must be stopped forthwith and completely. 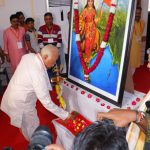