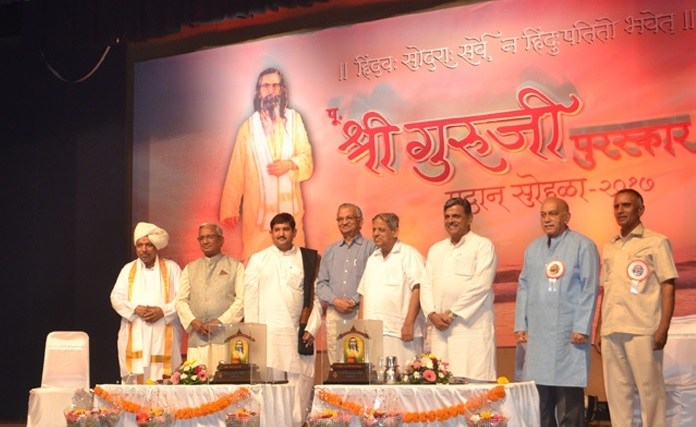 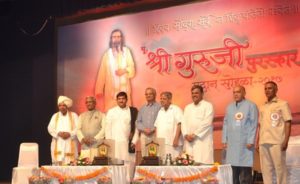 Mumbai: Selfless social workers are like ‘Salt on Earth’, who might number less in the society but their presence is essential for the society,” said Shri Dattatreya Hosabale, the Sah Sarkaryavah of Rashtriya Swayamsevak Sangh (RSS). He praised religious leader Chaitanya Maharaj Deglurkar and Dr. HR Nagendra for their selfless service. Both were felicitated with the prestigious ‘Shri Guruji Puraskar” by the RSS Janakalyan Samiti on 5th March at a function in Dombivli near Thane, Maharashtra.

Speaking on the occasion, Shri Hosabale said that science and spirituality, which are believed to be different to each other, are the same. Therefore, Yoga and modern science should be brought together to empower the whole country. Importantly, ‘Shri Guruji Puraskar” was instituted in the memory of Madhav Sadashiv Golwalkar, also known as Shri Guruji, the second Sarsanghchalak of the RSS. This award ceremony is organized every year to felicitate prominent social activists. The chief guest Dr. Anil Kakodkar, former chairman of the Atomic Energy Commission of India, felicitated both the prominent social activists.

Speaking on the importance of selfless service, Shri Hosabale remembered Shri Guruji and his hard work for the society and said, “Guruji inspired all the swayamsevaks of RSS to perform yoga”. He said “Guruji not only inspired the people of Bharat but also the people abroad to follow Yoga”. The social workers are an integral part of our country. They help creating an empowered society. He stressed the need for everyone to dedicate themselves to the service of the nation. Talking about Hinduism, he said, as upheld by the Supreme Court Hindutva is a way of life.

Recalling Shri Guruji’s contribution for defining the ‘Hinduness’, Shri Hosabale said Guruji spent his whole life to explain Hindutva, therefore in the year 1996 all the international institutes, governing bodies etc accepted that ‘Hinduism’ (Hindu Dharma) is not just a religion but it is a way of life.

Shri Dattatreya Hosabale said, Shri Guruji dedicated his whole life thinking and inspiring others for the development of our country and the betterment of the last person in the society. He worked on the theory which said that each and every man of our country must be happy. Guruji has also put forward the subject of equality and integrity. He believed that in order to empower and develop the country with the love and devotion, “equality and integrity” are the most important factors. Dattatreya further added that Guruji’s idea is very important for rebuilding the nation and will work as a guide for the development and the empowerment of the country.

Paying tribute to Shri Guruji, Dr Anil Kakodkar remembered him for his outstanding social works. Dr Kakodkar also thanked RSS for inviting him as the chief guest. He lauded the efforts taken by both the awardees for the social cause. “India is developing very rapidly but people have lost peace of mind; therefore, everyone should perform yoga. Yoga is the only way through which one can attain peace,” he said.

Receiving the award, Maharaj Deglurkar said, “I would like to thank all the dignitaries of RSS for honouring me with this award. While accepting this award I got a bit emotional. I am honoured for dedicating my life for ‘vaarkari’ people.” While praising the dedication and selfless work of Shri Guruji, Chaitanya Maharaj said, “Saint Dnyaneshwar is equal to Shri Guruji.” He further praised RSS and said that the beliefs of the Sangh at the earlier stage of my life forced me to think about empowering people and to love my country. “Beliefs are very important and Guruji has given us an inspiration. He himself is a source of inspiration. This award is not mine but of my culture, I am inspired by the hard work and the beliefs of Shri Guruji, therefore, I devoted my life to the social cause,” he added.

Meanwhile, Dr HR Nagendra said, “It is a great honour for me to receive this award. But I believe this award is not for me but for yoga. Shri Guruji is equal to god. Yoga not only keeps us updated with the knowledge but also answers the journey of life.”

“Yoga can increase memory. All the yoga institutions, medical institutions, scientists and government should come together to find out the solution for the incurable diseases which lead lakhs of people to (premature) death,” Dr. Nagendra added.

In the beginning of the ceremony, several school children who hail from Northeast part of Bharat sung patriotic songs. The work done by RSS till now in the field of education, medical science, poverty, agriculture across the country was also appreciated during the award ceremony.

The RSS Janakalyan Samiti commemorates the birth anniversary of Poojaniya Shri Guruji by giving a national award in his honour. The award is given to individuals or organisations for their outstanding achievements in 10 selected areas like Social Service, Literature, Bravery, Agriculture, Research, Social Awareness, Sports, Arts, Religion, Culture, Women’s Empowerment and Environment. The award consists of a certificate of honour, a memento and Rs. 1,00,000. Two candidates working in two different areas are selected for the award every year. The venue for the function in the state also changes every year. The function is organised on Shuddha Ekadashi in the month of Magh every year.