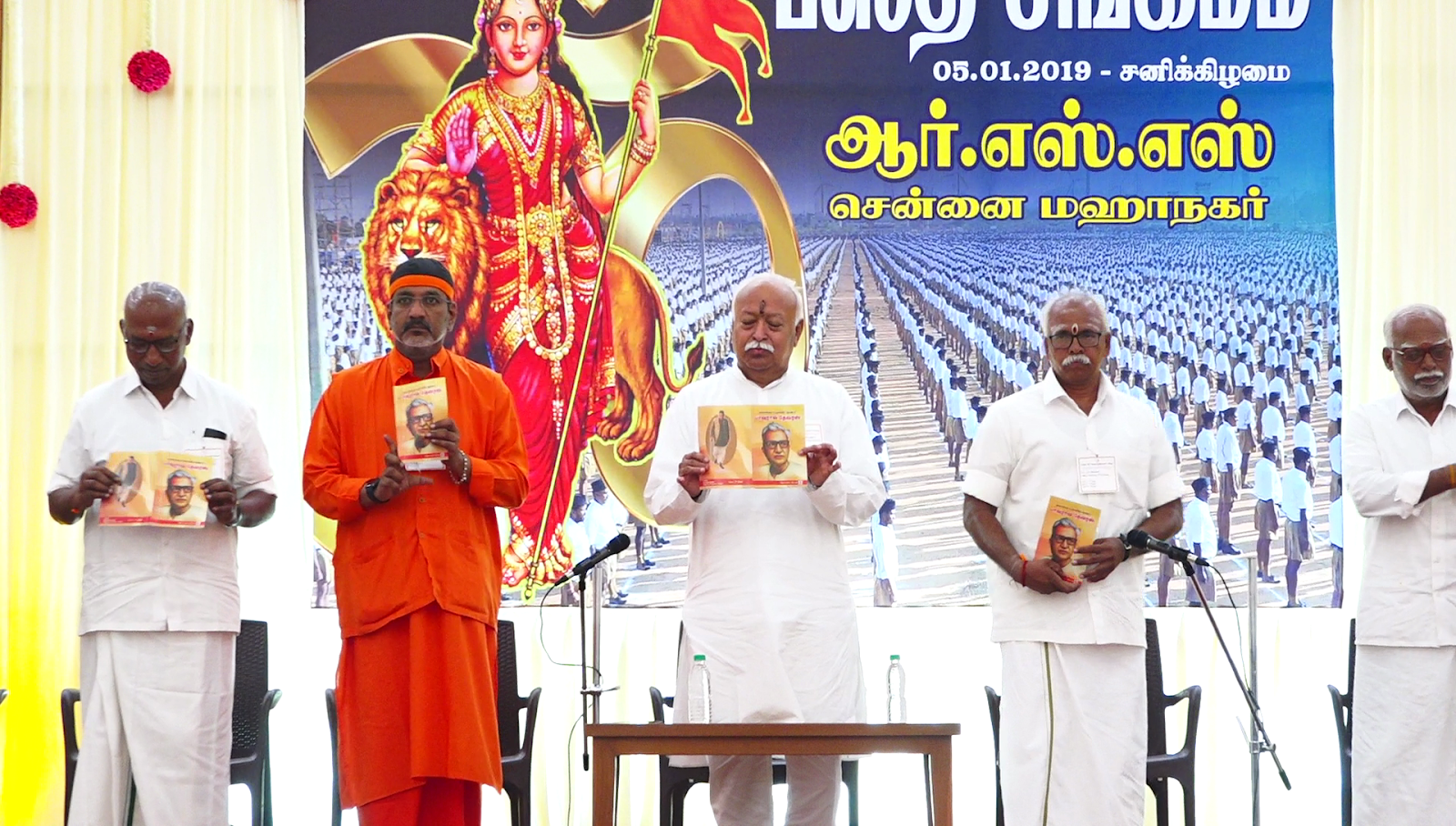 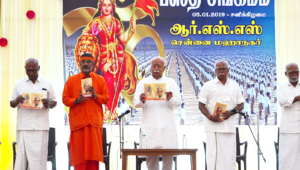 The Basti Sangamam of Chennai Mahanagar was held on Saturday the 5th January 2019 at the prestigious Ramachandra Convention Hall.

Speaking in the programme, RSS Sarsanghchalak Dr. Mohanji Bhagwat highlighted the importance of Shakha work which is the antidote for the ills plaguing the Hindu society. Though the Hindu nation is denoted by men with character, talent, seva attitude etc., it is because the Hindus identify themselves as Brahmin, forward/backward caste etc., or Gujarati, Bengali etc., there is negligence on the issue of Rama Janmabhoomi or the audacity of the forces in Kerala to desecrate the Sabarimala temple. Similarly, since the Hindus forgot their glorious past and became selfish, we were enslaved by handful of people. In order to make the Hindu society invincible the Sangh was started and Shakha is a simple technique for consolidating the Hindu society. 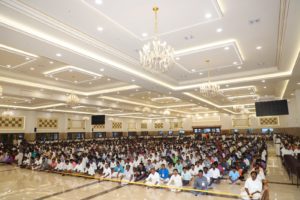 For Shakha work no instruments are needed. Only requirement is men. Shakha is a simple technique of conducting Shareerik, Boudhik programmes thereby paving the way for organised Hindu society. During Doctorji’s time the talk was how to take Sangh work in all provinces. The need of the hour now is how to take Sangh work in all Bastis for which only this programme is being organised.

For Dharma, the qualities required are Satya, compassion, purity and tapas. If purity is there Satya (truth) and compassion automatically comes. But purity in tapas is needed. Shakha work is a form of Tapas. By conducting the Shakha we acquire this Tapas which in turn will bring the other three qualities. Hence, we should expand the Shakhas in all Bastis.

Since the day being Hanumath Jayanthi, Mohanji Bhagwat brought out the fact that how Hanuman is a source of inspiration for Swayamsevaks. Like Hanuman who offered all his Gunas and talents for the cause of Lord Rama, the Swayamsevaks should offer their Gunas and talents for the all round development of our nation. Dealing at length how Hanuman conquered Surasa, Simhika and Lankini comparing them as Sattvic, Tamasic and Rajasic forces respectively while proceeding to Lanka. Similarly, we should also deal with such forces.

He concluded his speech declaring that no force on earth can stop Bharat becoming Vishwa Guru. 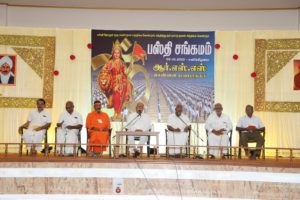 Out of the 880 Bastis in Chennai Mahanagar, 2913 Swayamsevaks from 825 basits attended the programme. A book on the life of Ma. Bhaurao Deoras, who was the Sah Sarkaryavah of Sangh was released on the occasion by Dr. Mohanji Bhagwat and the first copy was received by Poojya Swami Mitrananda of Chinmaya Mission.

Inspired by RSS, Swayamsevaks are active through more than 35 different organisations in various walks of Social life. Karykartas working in these organisations occasionally come together to share their experiences, achievements and observations. Two such meetings are organised in a year during September and January where’in such exchange and sharing of experiences take place. All the senior workers travel extensively and generally meet people from different stratas of the society. They always come with valuable inputs from the grassroots and share in the meeting through which all are enriched. It is not a decision making forum because every organisation is independent and has its own decision making mechanism. This year, January baithak (meeting) is scheduled in Chennai from 6th to January 9th in which about 50 karykartas will participate.