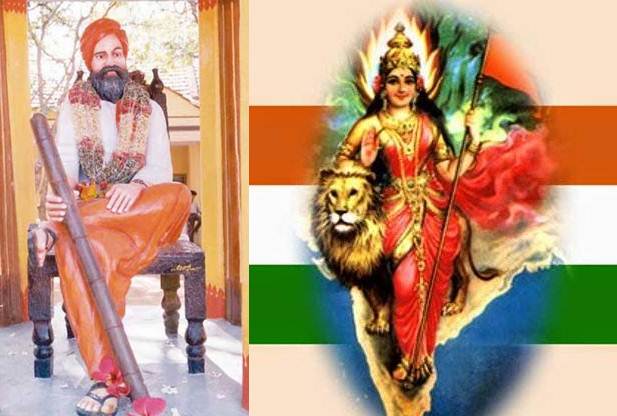 Subramanya Siva, is a life of Struggle, Service and Sacrifice. Though he lived in this world for 41 years only it was, is and will be an inspirational one. He bravely accepted the poverty and misery that followed him from birth to the end, smilingly perceiving them as the prasad of Mother Parasakthi donning the form of Bharat Mata.

Subramanya was born on October 4, 1884 in Vattalagundu, Dindigul district. His parents were Rajam Iyer and Nagalakshmi ammal. With upanayanam at the age of 9 he was named Subramanya Sharma. Family was always in stress due to poverty. He got married at the age of 15, as per the custom prevailing in those days. Marriage did not bring any change in his life. As ever, he lived in his own way unattached to any worldly desires or much interest in studies.

For schooling he had to move from town to town, (such as Madurai, Trivandrum and Coimbatore) supported by benevolent relatives and charities. With much difficulties, he studied up to matriculation. He got a job in the Sivakasi Police Superintendent’s Office at a salary of Rupees 10 a month in 1901 on the recommendation of a relative, but left on the same day saying ‘What a slave job this is!’.

He had learnt silambam (stick fight) and wrestling from Trivandrum Navaneetham Krishna Iyer during his schooling in Trivandrum with which he used to pick up quarrel with the people in the neighbourhood.

A turning point occurred in his life in 1903 when he met Sree Satchidananda Swamiji. He started regularly reaching to and serving Swamiji. One day Swamiji called him Siva and he said that ‘you will hence forth be called Subramanya Siva’.  Swamiji’s words were prophetic and is it not true that till date he is known as Subramanya Siva or Siva?

Association with the Arya Samaj, made him interested in spiritual matters. It widened his horizon and convinced him that the true spiritual salvation is actively serving the nationalist causes. He resolved to join the liberation struggle.

He was inspired by V O Chidambaram Pillai (VOC) who had acquired an iconic status for leading Swadeshi movement in various forms like running spinning mills and steam ship company. Siva collaborated with VOC. He was a star speaker in the meetings of VOC. To hear his fiery speeches, people used to flock in large numbers. In the very first occasion, after hearing Subramanya Siva and his skills in organising campaign against the British rule, the national poet Mahakavi Bharathi hailed him as “My hero Shivaji! You are reincarnation of Chhatrapati Shivaji”, embraced him and blessed him.

Subramanya Siva was sentenced to 10 years’ rigorous imprisonment for his involvement in the freedom struggle along with VOC, and later reduced to 6 years on appeal. In Tiruchy jail, he was locked up with the leprosy patients and subjected to inhuman treatment. The British government did not wish to spend on curing his illness and released him within 4 years, in 1912. He moved to Chennai with his wife. Poverty as usual followed him earnestly. All these could not shake his faith saying “Mother Parasakthi will take care of me”. He had a hand to mouth living by running a small business and running a magazine by name ‘Gnaana Baanu’. He was a prolific writer and produced 13 books on different genres- prose, poetry and novel. The list includes books on Ramakrishna Paramahamsa, Swami Vivekananda and his guru Satchidananda Swami.  After the untimely demise of his wife Meenakshi in 1915, he became a free bird. As unfettered, he got further emboldened and spoke out against British rule at public meetings. He encouraged the peoples for freedom struggle.

On the day of Makara Sankaranti in 1921, he started wearing only saffron robe and turban as Swami Vivekananda was his maanaaseeka guru. There on he led completely a life of a sanyasi. People started to call him “Swatantraanandaa”. Through his writings and speeches, he shared his deep-rooted conviction of Desa Bhakti coupled with Deva Bhakti. For him both are two sides of the same coin. Thus, he propagated spiritual nationalism. He encouraged people to meditate upon the form of Bharat Mata. He planned to build Bharat Mata temple at Paaparapatti, Dharmapuri district of Tamil Nadu. Foundation stone was laid by Chittaranjan Das. He raised funds by mobilising public support for his efforts. He was twice imprisoned by the British government for making provocative speeches. By this time, his body condition deteriorated further due to leprosy. Therefore, once again realizing the severity of his illness, the government released him. After that, the British government forbade him to travel by train. In spite of these restrictions, he continued his campaign by moving from village to village on foot or by bullock cart. Finally, he left this world on 23 July, 1925 without completing the work of the Bharat Mata Temple.

Kanchi Peetaadipati, His Holiness Sankaracharya Chandrasekara Saraswati, was camping at Kumbakonam in 1921, during Mahamagam, ( a function held in this town once in twelve years similar to Kumbh Mela of Prayag). Sankaracharya invited Subramanya Siva and accordingly he visited the mutt and received the blessings of Swamiji. Swamiji, was all in praise of Siva and whole-heartedly said, “Today we had the privilege of seeing this selfless soul. He appears to me verily as the embodiment of Lord Shiva. If the mothers of our country beget children endowed with a desire to be true martyrs, undoubtedly they will be the blessed ones.” 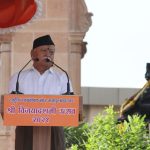