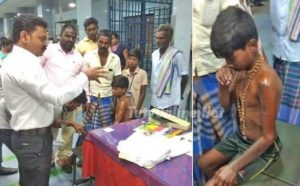 A student in Tamil Nadu had to bear the brunt for merely following his faith and tradition. A seventh standard student of a Government aided school in the state has been punished for wearing Mala, black shirts for Sabarimala. The boy who was given cleaning of toilets in the Sabarimala Deeksha attire as punishment, has burnt his hands when the toilet cleaning acid fell on his hands.

In the month of December and January, lakhs of Ayyappa devotees visit Sabarimala after a penance of 48 days. It is during this period they get ŌĆ£Ayyappa Swami DeekshaŌĆØ dress and Mala from a Guruji. They are mandated not sleep with their wives; They Should not see women in her monthly periods. They have bath both morning and evening and perform pooja by reciting Sarana keerthanas.

Apart from adults, even school going boys and girls (girls below 10 years) accompany their brothers, fathers or relatives to Sabarimala. This has been the tradition of thousands of years.

Of late, discrimination of Sabarimala devotees in schools and convents has been on the rise. Students who adhere to the Ayyappa Swami Deeksha have been fined or suspended. The so called Dravidian leaders and media, human rights groups have been turning a NelsonŌĆÖs eye to these instances where Sabarimala devotees have been targeted. It seems they do not want to incur the wrath of the minorities.

The recent incident involves a student of seventh standard Promoth Bala (12), son of Deva Kumar, studying in government aided TDTA Good Shepherd High School at Edairkaadu in Tuticorin district. On seeing the boy coming with black dress with mala on his neck, his class teacher wanted to punish him. In a obvious move to demean the Deeksha dress he was wearing and sanctity attached to it, the teacher asked him to clean the toilets in the same attire.

The toilet was to be cleaned with acid. While cleaning the acid fell on his forehand and burnt a large part of his hand. Unable to bear the pain, he was rushed to hospital where he was treated. His parents and relatives protested against the school and urged the authorities to arrest the Head Master of the school and the class teacher responsible for this. Some alleged that teacher only poured the acid on his hands.

The school expecting a severe backlash from parents and relatives seems to have planted other students to discredit Bala’s version of the incident. Another student has claimed that the acid bottle he was carrying accidentally fell on Bala’s hands when a boy behind him stumbled and fell on him. This tutored version did not match the happenings in the school on the fateful day.

Chief Education officer of Tuticorin, A Gnanagowri, has said action would be taken against Headmaster Jebakaran Premkumar for carelessly asking students to carry hazardous acid bottles. “Since it is an aided school, we can’t act directly. However will inform the secretary of the school to suspend him for his negligence as an interim actionŌĆØ, she added.

Silence of the Liberals

Ironically the media and politicians have maintained a stoic silence on this episode. None of the human rights activists or commissions have come forward to help this helpless poor student.

In Tuticorin district, Christians are a dominant community and their votes matters for politicians. It is quiet natural that none can raise their fingers against them or their institutions. The evangelical elements are in full swing in the state to convert gullible people exploiting their poverty and illiteracy.

Despite the awareness created by the Hindu organisations like Hindu Munnani and other Sangh parivar outfits these activities against Hinduism, belittling their customs and traditions, disparaging their gods have been going unchecked with the active support of crypto Christians who are at the helm of affairs in the state.

Not the first instance of discrimination

Targeting Bala is not the first and isolated incident of discrimination of Sabarimala devotees. Last year too, a seven year old student was punished for not wearing slippers. He too was to accompany his father to Sabarimala after the Deeksha period. The Headmaster of a private school in Rameswaram in Ramnathapuram district was accused of beating a student for coming without wearing slippers. Despite his plea that as he was observing Vratham (penance) for going on a pilgrimage to the Sabarimala Ayyappa shrine, he was not spared. Ironically, Rameswaram is the birth place of former President APJ Abdul Kalam who deeply respected Hindu traditions and practices.

The incident had triggered protests by many Hindu outfits. They accused the Head Master of the school of not understanding the sentiment behind not wearing footwear. The headmaster justified his action by taking umbrage at the school rules. He said school rules do not permit students without footwear to enter the school premises.

Hindu students in Tamil Nadu have been punished for wearing Bindi and bangles. Most of the offenders are Christian schools who see these practices as anathema to their beliefs. Their intolerance of Hindu practices is well known but it is the silence of the liberal and secular brigade that has done most harm to the Hindus in the state.