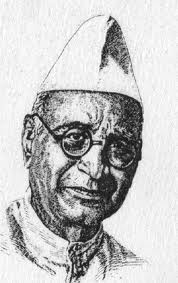 Born on 29 November 1869, at Bhavnagar in Saurashtra, Amritlal, later on known as Thakkar Bapa, was the second son of Vithaldas Thakkar. He belonged to the (Goghari) Lohana Community a business community.Married to Mulibai, Vithaldas had one daughter, Jabiben and six sons, Parmanand, Amritlal, Maganlal, Manilal, Keshavlal and Narayanji. Vithladas was employed in a business firm on a meager salary.

At the age of eleven or twelve, Amritlal married Jivkorbai. She died in 1909. And after about a year or two, he married Divaliben. She too died in about two years after the marriage.

Amritlal completed his primary education at Bhavnagar and Dholera. He joined the Anglo-Vernacular School and then the Alfred High School at Bhavnagar. He stood first in the Matriculation examination in the whole of Bhavnagar State in 1886 and was awarded the Jashvantsinhji Scholarship. Amritlal joined the Engineering College, Poona (1887), and did his L.C.E. (Licentiate of Civil Engineering) in 1890.

Amirtlal’s father Vithladas, a man of strong character, ran the hostel for the boys of his community at Bhavnagar. During the famine of 1900, Vithladas organised relief work in Bhavnagar for the needy persons of his community. To Thakkar Bapa, his father was his first Guru. His mother, Mulima, a kind-hearted lady, was always ready to help the poor neighbours.

From 1890 to 1900 Amritlal served in various capacities as an engineer in the States of Kathaiwad.In 1900 he went to East Africa to serve on the Uganda Railway for three years. After his return from East Africa, he joined as a Chief Engineer in Sanghli State. Hence he came in contact with Gopal Krishna Gokhale and Dhondo Keshav Karve. Thakkar Bapa considered Karve as one of his four Gurus.

After a year, he resigned from the Sanghli post and got an appointment in the Bombay Municipality. He was posted at Kurla, a suburb of Bombay. It was here that he came in contact with nearly 200 to 300 untouchables. With the help of Ramaji Shinde of the Depressed Classes Mission, he started a school for the children of the Kurla sweepers. To Thakkar Bapa, Shinde was his second Guru. Encouraged by G. K. Deodhar of the Servants of India Society, he implemented scheme of making sweepers debt-free. Deodhar became his third Guru. (He was already in touch with D. K. Karve, whom he considered his fourth Guru.)

After the death of his father in 1913, he resigned from his post and joined the Servants of India Society on 6 February 1914 and soon after that he carried out famine relief work in Gokula and Mathura in U.P.

During this period Thakkar Bapa was introduced to Gandhiji by Gokhale in Bombay. Since then a close relationship developed between the two.In 1915-16. Thakkar Bapa organised Co-operative Societies for sweepers in Bombay, opened a school for the children of the labourers in Ahmedabad and organised famine-relief work in Kutch.

In 1917 he, along with Deodhar and Joshi, conducted revenue inquiry in the Kaira district of Gujarat. He toured the Gujarat-Kathiawad regions to collect data for the Compulsory Education Bill introduced in the Bombay Legislative Council in 1918.

During 1918-19 his services were loaned to the Tata Iron and Steel Company of Jamshedpur to improve the conditions of the workmen. Also, he organised famine relief in the District of the Panchmahals in Gujrat. Hence he was able to observe at first hand the total neglect and misery of the Bhils.

In 1920 Thakkar Bapa went to Orissa which was caught in a severe famine. His famine work marked the beginning of his public life in Orissa. He organised Khadi work in Kathiawad in 1921.

The Bhils of Panchmahals once again were facing severe famine in 1922. Thakkar Bapa took up their cause and founded the Bhil Seva Mandal in 1923.

In 1930, during the hectic days of the Civil Disobedience Movement, while participating in the liquor picketing at Mehmedabad, a town near Ahmedabad, he was arrested and sentenced to six months’ jail with hard labour, but was released after nearly forty days.

During Gandijhi’s epic fast unto death in 1932, Thakkar Bapa played a singular role in the negotiations which led to the Poona Pact. At Gandhiji’s request, Thakkar Bapa accepted the General Secretaryship of the Harijan Sevak Sangh. In less than a year, he organised 22 Provincial branches and 178 District centres of the Harijan Sevak Sangh. During 1933-34 he undertook a Harijan tour, along with Gandhiji, months. From 1934 to 1937 he was busy with Harijan work.

From 1938 to 1942 he worked on various committees appointed by the Governments of C.P. and Berar, Orissa, Bihar, Bombay, etc., for the welfare for the aboriginal tribes and backward classes.

During 1943-44 he organised famine-relief work in Orissa, Bengal and other parts of Bharat like Madras and Bijapur. In 1944 he organised the Kasturba Gandhi National Memorial Fund and was appointed Secretary of the Fund and subsequently of the Trust. In the same year, he founded the Gond Sevak Sangh, now called ‘Vanavasi Seva Mandal’, in Mandle, M. P.

He became the Secretary of the Mahadev Desai Memorial Fund in 1945. He was also appointed Vice-President of the Adimjati Mandal, Ranchi, with Dr.Rajendra Prasad as its President in 1946.

From October 1946 to March 1947, he was at Noakhali and other districts of East Bengal with Gandhiji among the victims of communal riots.After Independence, he was elected to the Constituent Assembly. He acted as Chairman of the Excluded and Partially Excluded Areas (other than Assam) Sub-Committee of the Constituent Assembly and a member of the Sub-Committee for Assam (1947). He was also a trustee and a member of the Executive Committee, Gandhi National Memorial Fund. On 29 November 1949, on completion of his 80th year, he was presented with a Commemoration Volume at a public meeting held in Delhi, over which Sardar Patel presided.

Till the time of his death on 19 January 1951, he kept himself busy with problems of the neglected sections of our society. Thakkar Bapa was extremely simple in his mode of life. A man of few needs, his work was his sole recreation. He was convinced that untouchability should be abolished and the Vanvasis in various parts of Bharat must enjoy the fruits of our civilized society.

To him service of humanity was the service of God. He was fully aware of the importance of elementary universal education. He criticised the famine policy of the British Government, its negligence of the welfare of the aboriginal tribes and the ruthlessness with which it tried to suppress the national movement.

His views on labour problems were based purely on humanitarian grounds. He was convinced that, in a larger way, Khadi production and cottage industry could be a boon for the poor people in the villages.

Thakkar Bapa was a man of actions. From his occasional writings in The Servant of India, The Harijan and The Hindustan Times, and through the pages of his Diary, Kale Memorial Lecture (1941) on ‘The Problems of Aborigines in India’ and his book ‘Tribes of India’ (1950), one gathers the impression of a loving human soul who worked tirelessly with deep learning and scientific method.

As a devoted member of the Servants of India Society, he abided by the regulations of the Society and did not participate in the revolutionary freedom movement launched by Gandhiji. In the words of Pyarelal,” He likes more and more to realize the contents of independence in terms of those for whom the Congress under Gandhiji’s leadership struggled to win it, viz., the lowliest and the lost, without which the political independence that we have won must remain an empty mirage.” Gandhiji once said about him that his ambition was to equal Bapa’s record of selfless service. He was truly called ‘Bapa’ -the father of the forlorn people. 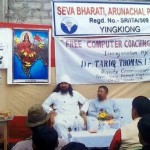