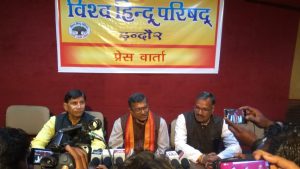 Indore. The Vishwa Hindu Parishad (VHP) has a presence in around 60,000 places in Bharat and has its organizational base in 29 countries. VHP runs more than 1 lakh service projects in the fields of education, health, economic, self- dependence, women empowerment and skill development programmes. Plans are afoot to enhance these service projects in the Malwa region too.

While addressing a press conference in press club of Indore (MP) Milind Parande said that the Central Govt. has brought in a citizenship amendment Act (CAA), which offers citizenship to the persecuted minorities (Hindus, Buddhists, Jains, Sikhs, Parsis and Christians) of Pakistan, Afghanistan and Bangladesh. The Govt. deserves immense praise for bringing in this law. These countries, being Islamic nations, the Muslims residing there, are, neither minorities, nor persecuted on religious grounds. The CAA concerns itself only with persecuted minorities from these countries, hence it does not affect the Indian Muslims at all.

Four days ago, Nankana Sahib, the holy birthplace of Guru Nanak dev ji,  was plundered and desecrated by a Muslim mob after Friday Namaz. This is one more example of the persecution that the Hindu-Sikh community has been facing in Pakistan. In this case, the mob was led by the same Muslim who had earlier kidnapped the daughter of the Gurudwara’s granthi.

Communist Parties and some other parties, which are lending support to such acts of violence are displaying their anti-national and anti-social mind-set, only for the sake of garnering muslim votes by muslim appeasement. Yesterday, we saw “Free Kashmir” banner being displayed at a rally in Mumbai.

VHP will run a campaign throughout the country, along with its Malwa branch, to weed out the false propaganda being made against the CAA. VHP, being a Hindu organisation, will work to its hilt, to aid and help the persecuted minorities from these countries, in getting Indian citizenship.

Andhra Pradesh govt. has taken innumerable unconstitutional decisions, like acquiring Hindu temple land by unlawful means, paying muslim maulvis and christian priests from govt. coffers, non-Hindus being inducted into the management and trust of Hindu temples and religious bodies. VHP strongly condemns these anti-Hindu acts of the Andhra Pradesh govt. This January, we will launch a procession in all the districts of the country to protest against this unlawful activity of the Andhra Govt. A large scale agitation will also be launched in Andhra against this and VHP will also go to court against these decisions.

Cow smuggling has been going on in the areas bordering Madhya pradesh and Maharashtra and in the district of Jhabua. The Christian missionaries have been resorting to proselytization of Hindus unhindered. VHP has even handed over to the police, a list of 47 illegal Christian prayer halls, but no action has been taken by the govt. till date. In Ratlam district, 7-8 Hindu workers have already been brutally murdered last year, VHP has been apprising the administration regarding this and demands that strict action be taken against these crimes.