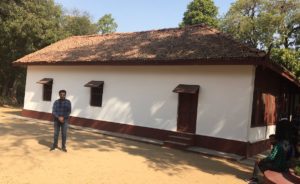 Bollywood director and Author of the book Urban Naxals, Vivek Agnihotri was allegedly attacked by a group of NSUI students during his visit to Bhavan’s Sheth RA College of Arts and Commerce in Ahmedabad on Saturday.

According to the reports, Vivek Agnihotri, and Editor of the weekly ‘Organiser’, Prafulla Ketkar was supposed to address a lecture on ‘Urban Naxalism’ at MS University of Baroda on Saturday. Vivek Agnihotri alleged that some members of the NSUI attacked his car despite the presence of the media when he came out of Bhavan’s Sheth College, Ahmedabad.

In a tweet, Vivek told that an army of NSUI students attacked his car in front of media and despite the presence of heavy security. He tagged Congress president Rahul Gandhi saying that Congress ‘goons’ can break his bones but they can’t break his spirit.

Vivek Agnihotri said that student wing of the Congress vandalised the taxi in which he was supposed to reach Vadodara to deliver a lecture on ‘Urban Naxalism’. “They dented the poor guy’s taxi. Screaming ‘Agnihotri, Go back… go back’. Their timing was all wrong because I was going back after finishing a wonderful event,” said Agnihotri.

Vivek Agnihotri was also previously attacked left stronghold Jadavpur University against the screening of his movie ‘Buddha in a Traffic Jam’, which exposed the sinister politics and nexus between the left wing terror in rural areas and backed by the left-wing intelligentsia in the urban areas.