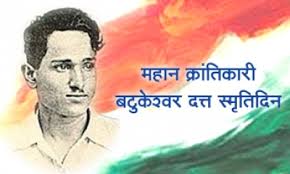 Batukeshwar Dutt was an Indian revolutionary in the early 1900s. BK Dutt is best known for having bombed, along with Bhagat Singh,  in the Punjab Legislative Assembly on 8 April 1929. After his arrest, he and Singh were instrumental in initiating a hunger strike protesting against the rights and state of Indian political prisoners. Batukeshwar Dutt was also known as BK Dutta. He was a member of the Hindustan Socialist Republican Association, one of the first Marxist parties in India.

Batukeshwar Dutt was an Indian revolutionary and a freedom fighter in the early 1900s. He is best known for having exploded a few bombs, along with Bhagat Singh, in the Central Legislative Assembly in New Delhi on 8 April 1929. After they were arrested, tried and imprisoned for life, he and Bhagat Singh initiated a historic hunger strike protesting against the abusive treatment of Indian political prisoners, and eventually secured some rights for them. He was a member of the Hindustan Socialist Republican Association.

Batukeshwar Dutt, also known as B.K. Dutt, Battu and Mohan, son of Goshtha Bihari Dutt, was born on 18 November 1910 in the village Oari in Nani Bedwan district, and lived also in Khanda and Mausu in Burdwan district in Bengal. He graduated from P.P.N. High School in Kanpur. He was a close associate of freedom fighters Chandrashekhar Azad and Bhagat Singh. He met Bhagat Singh in Kanpur in 1924. Working for the Hindustan Socialist Republican Association in Kanpur, he learned how to make bombs.

Bhagat Singh and Batukeshwar Dutt threw a non-lethal bomb in the corridors of Central Legislative Assembly while shouting the slogans of “Inquilab Zindabad”.

The British Government introduced the Public Safety Bill & the Trade Dispute Bill in the Central Legislative Assembly. They gave more power to the British Government and the police against Indian revolutionaries and freedom fighters.The bills were defeated in the Assembly by one vote. However, they were enacted by an ordinance, claiming that the ordinance was in the best interest of the public. To protest against this ordinance, the Hindustan Socialist Republican Association decided to explode a few bombs in the Central Legislative Assembly. Chandrashekhar Azad, the leader of that revolutionary movement, was not in favor of exploding bombs. However, others in the party persuaded Azad to accept Bhagat Singh’s plan, and Azad selected Batukeshwar Dutt to accompany Bhagat Singh and throw the bombs in the Assembly.

Along with Bhagat Singh, Batukeshwar Dutt was tried in the Central Assembly Bomb Case, and was sentenced in 1929 to life imprisonment by the Sessions Judge of Delhi under Section 307 of the Indian Penal Code & Section 4 of the Explosive Substances Act. He was deported to the Cellular Jail in Andaman which was infamously known as Kala Pani (Black Waters). He also faced trial in the Lahore Conspiracy Case but was found not guilty. He participated in the two historic hunger strikes in the Cellular Jail during May 1933 and July 1937. Batukeshwar Dutt was repatriated to the mainland in 1937, and was later released from the Bankipur Jail in Patna in 1938.

After his release from prison Batukeshwar Dutt contracted tuberculosis. He nonetheless participated in the Quit India Movement of Mahatma Gandhi and was again jailed for four years. After India gained independence, he married Anjali in November 1947. It is sad that independent India did not accord him any recognition, and he spent his remaining life in penury away from political limelight, a forgotten hero. Batukeshwar Dutt outlived all his comrades and died on 20 July 1965 in the AIIMS in Delhi after his long illness. He was cremated in Hussainiwala near Firozepur in Punjab where the bodies of his comrades Bhagat Singh, Rajguru and Sukhdev were also cremated many years ago. He was survived by his only daughter, Mrs. Bharti Bagchi, in Patna where his house was situated in the Jakkanpur area. The B.K. Dutt Colony in New Delhi is named after Batukeshwar Dutt death. 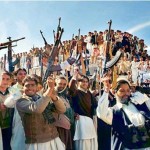