Author, thinker Ram Madhav’s ‘Partitioned Freedom’ book launch event was held by Pragna Bharati in the evening of 1st October 2022 at ITC Grand Kakatiya, Hyderabad. Many dignitaries and people from all walks of life, attended the event in large numbers.

Apparao, former VC, HCU in his warm introduction of the book stated that in this 75th anniversary and Amrit kaal, we all feel India should have remained united. The book is well-researched, well-reasoned, and presents documented factual history of the tumultuous events of the period. As the Hon’ble PM said we all must remember the horrors of partition. The book is an honest attempt, is authentic, and has love for the nation. In the book, Ram Madhav raises the questions whether the nation can become Akhand Bharat again, and whether Hindus and muslims can live together amicably in the united Bharat. He chronicles the history from 1905 up to 1947 through the bloodied chapters of riots, killings and displacement of millions. Gandhiji’s political premise was that India cannot become free without Hindu – muslim unity, his thinking was based on his South African experience. Seeds of partition were sowed through the congress’s misplaced trust in the muslim politics, and eventually congress was forced to acquiesce to Jinnah’s Pakistan. The result was partitioned freedom for the nation.

Hanuman Chowdary in his address stated that Ram Madhav has written an excellent book of factual history. The Bang-Bhang or the division of Bengal in 1905 ignited the country with Vandematharam, Swarajya and Swadeshi and the Bengal partition was undone. However, the abrahamic religions’ intolerance and conflict with Hindu culture pushed the country into the peril of partition. Syed Ahmed Khan, who established AMU was the progenitor of two-nation theory. If Chattrapati Shivaji is the hero of Hindus, the tyrannical Aurangzeb is the hero of muslims, these two sets of people were diametrically opposite to each other. We have to be alert now as present-day events too are alarming. Today we have to rethink whether Hindu-muslim unity is possible, and what’s the alternative available.

Prof Krishnamurthy Subramanian, Director IMF, ex- Chief Economic Advisor to Govt of India, in his address stated that for 17.5 centuries India had 1/3 share in world’s GDP, due to the unique socio-economic base of Indian society. The Indian idea and pinnacle of liberalism is far more profound and all encompassing. Quoting Upanishads, Bhagavad Geeta and other texts, Dr Subramanian said compared to our ancestors, today we are reduced to being creative and intellectual pygmies. He said book is an effort to Indianize Indian thinking.

The Chief Guest of the evening, M. Narayana Rao, Retd Chief Justice, Himachal Pradesh HC in his remarks stated that a nation must be a homogenous entity, unfortunately muslims believed in megalomaniac Jinnah. In 1943 itself, Lord Wavell said they can’t manage India any longer. On the advice of the then President Radhakrishnan, the PM Lalbahadur Shastry withdrew the Hindi language bill, so that the southern parts of the country don’t agitate on language policy leading to balkanization of the country. We need to take all the backward sections among our people along with us in the growth of the nation. Minorities should also realize that it is our collective responsibility to protect the integrity and sovereignty of the nation. He said Ram Madhav had written balanced factual history without any biases.

Ram Madhav, the author of the book stated that based unfortunate fables were spread in the name of history. He said his effort was to place the facts before the reader and the period covered is the time between two partitions 1905 and 1947; one partition could be reversed, the second one couldn’t be prevented. One lesson is that people of the country should ever be ready to rise up to any challenges and protect the society. Jinnah was never a leader of all muslims, and Muslim League couldn’t ever win substantially, yet they were seen as pan-Indian muslim party, today we shouldn’t make that same mistake. We need to unite partitioned hearts first. To understand history, we need to understand that period within the context of that period. Ram Madhav concluded his address by saying that today we must understand that Hindus and Muslims must live together amicably without quarrelling.

All the dignitaries on the stage were felicitated by Pragna Bharati members. 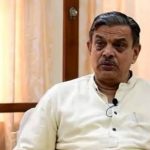