New Delhi. New Delhi. Banking operations were affected all over the country Wednesday, November 12 as over a million bank employees went on a day’s strike in support of their various demands, including pay revision, a press release said by Shri Ashwani Rana, vice-president of National Organistion of Bank Workers here.

Employees and officers of 26 public sector Banks, 12 private banks and 6 foriegn banks under the banner of United Forum of Bank Unions (UFBU) an umbrella organisation of nine bank employees and officers unions called the strike. In these unions AIBEA, NOBW, NCBE, INBEF, BEFI, AIBOC, AIBOA, NOBO, INBOC are included. More than 70000 branches and offices of all Public Sector, Private Sector Banks were affected. Strike was total success, the release said.

Last minute attempt made by Chief Labour Commissioner and IBA could not avoid all India Bank Strike.  Unfortunately, IBA remained adamant and refused to improve their offer of 11% despite the flexibility on unions in scaling down the demand to 23%.

The wage revision for bank employees is due from 01.11.2012 subsequent to the expiry of the last Bipartite Settlement on 31.10.2012.  The common charter of demands, separately for workmen and officers, were submitted by UFBU to IBA on 30.10.2012 i.e., before the expiry of last bipartite settlement.

The formal negotiations have started in February 2013 and hardly around 14 rounds of discussions have so far taken place between IBA and UFBU resulting in one round of discussion once in two months.

IBA is quoting the reason of non-affordability due to NPAs for which employees and officers are no where concern and working for the operating profit. UFBU has also decided to go on Zone wise strike from 2nd December to 5th December, 2014. 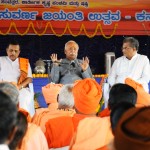