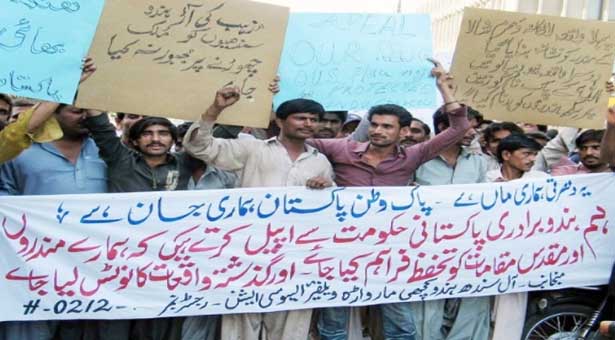 Hindus demanded on Monday that vandals involved in damaging their temples be charged under the blasphemy law. They also called for installation of CCTV cameras and deployment of guards at their houses of worship.

“The perpetrators should be charged with blasphemy. The minorities’ ministry and the provincial government should register all our temples and provide us security,” said Pakistan Muslim League – Nawaz MNA and chief patron of the Pakistan Hindu Council, Dr Ramesh Kumar Vankwani.

He was among the scores of Hindu protesters gathered at Karachi Press Club to protest the recent attacks at their temples across Sindh.

Holding a banner above her head, Sunita Rajput claimed that the damaged temples were historic structures, older than the formation of Pakistan and India. “The sanctity of the temples should be respected.”

Inside the press club, the Hindu parliamentarians and community representatives held a press conference in which they lambasted the government and demanded it open its eyes to the alarming situation.

Pakistan Hindu Council president Cheela Ram Kewlani said that attacks had been carried out every other day of the past month. He said that the series of attacks had started on March 15, when the Dharam Shala in Larkana was torched, followed by an attack on a temple in Badin on March 17. On March 28, the Hanuman temple in Hyderabad was set on fire, while on Sunday the Faqir Par Braham ashram in Tharparkar was desecrated.

“This is the fourth attack in the last two weeks and a shameful situation for everyone. Criminals come to the temple in a car carrying candles. In the next two minutes, they throw the deities to the floor, sprinkle petrol and set the temples alight, escaping freely as if there is no law and order.”

Kewlani requested politicians to take notice of the situation. “As long as our houses of worships are not safe, we are not safe. Some people want us to leave Sindh. But we will never leave Sindh, no matter what they do.” He added that it was the responsibility of the Muslim brothers to protect the minorities and give them security.

Pakistan Tehreek-e-Insaf (PTI) MNA Lal Malhi said that the provincial and the federal government had failed to protect the minorities in Sindh. “We have been living in Sindh for years without any conflict. Over 25,000 people migrated to India last year because of the situation.” He called for constitutional rights to be provided to them.

The community also expressed their concerns about the flyover being constructed at Clifton, and said that heavy drilling could damage their temple located in the area.

“We are also concerned about how would we able to enter the area once the flyover and the underpasses are made. We demand a separate boundary wall so that our people can access the temple.”

Meanwhile, Hindus went on strike and held protest demonstrations in parts of Mirpurkhas, Umerkot and Tharparkar districts to condemn the attacks on their places of worship.

All commercial activities in Umerkot, Kunri and Samaro tehsils of Umerkot district remained suspended on Monday on the call of PTI MNA Lal Malhi. Led by Malhi, the community also staged a protest rally in Umerkot.

In Mirpurkhas, Pakistan Hindu Panchayat leader MNA Kishan Chand Parwani led a protest walk from Lal Mandir to the press club where they also staged a token sit-in. “We will not leave Sindh out of fear of such attacks,” asserted Parwani, condemning the recent four incidents of desecration in Larkana, Badin, Hyderabad and Tharparkar. “We are Pakistani and Sindh is our motherland.”

Parwani said that if the government could not provide them security and protection, they should be allowed to carry weapons for their own security. 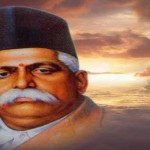