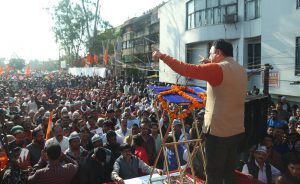 Bhopal. Addressing a rally organised in support of the Citizenship Amendment Act (CAA) organised by ‘Jagaruk Nagarik Manch’ here Rajya Sabha MP Rakesh Sinha made it clear that the CAA is not against any genuine Indian citizen.

The act is for giving citizenship to those persecuted minorities coming to India because of religious persecution they had to face in the neighbouring countries of Pakistan, Afghanistan and Bangladesh. The CAA support rally was organised at Depot Chauraha under the leadership of senior ophthalmologist Dr. PS Bindra. Rakesh Sinha addressed the rally as chief speaker.

Expressing serious concern over the decreasing number of minorities in Pakistan, Afghanistan and Bangladesh, Prof Sinha referred to the book by Prof Abul Barkat of Dhaka University which stated how the number of Hindus in Bangladesh was reducing by 932 daily since 1964. 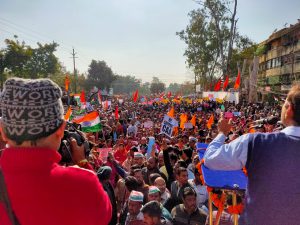 Explaining about the CAA he said that the act provides for granting citizenship to the persecuted minorities not on the economic basis but as they had to face religious restrictions and persecution in the name of religion. He asked those opposing this act as to which Muslims were forced not to offer prayers in these three countries.

The Hindu refugees who had migrated to India also shared their plight with the participants in the rally. They said that Hindus were not allowed to perform their religious duties, business and live under pressure of conversion.

Dr. Bindra referred to violence at Nankana Sahib, the birth place of Guru Nanak Dev ji and explained how the girls were abducted and converted into Islam forcibly in these countries. Such a Hindu who had to face religious persecution would come to India only as there is no other country in the world to accept him, he said supporting the CAA.

Joint Convener of the Forum Advocate Ravi Goyal said that the basic objective of this march was to remove misgivings about CAA and set the rumours at rest. The rally began from Depot Chauraha and traversed through Rangmahal to Roshanpura and back to starting point. Thousands participated in this two-km long rally displaying placards and national flag venting slogans “we support CAA”, “Bharat Mata Ki Jay”, “Vande Mataram”, etc. 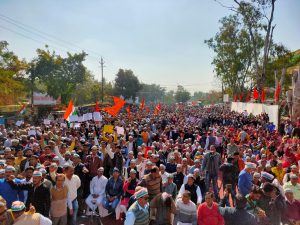 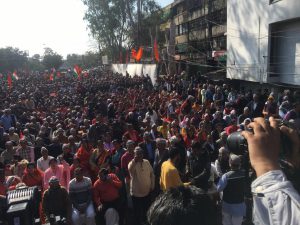 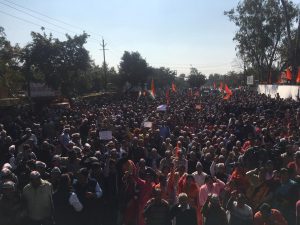