New Delhi. Vishwa Hindu Parishad (VHP) and Hindus from all over the world call for the immediate release of three Hindu girls and a full stop on persistent atrocities on Hindus, their culture & places of worship in Pakistan.

Addressing media in New Delhi, Milind Parande, the Secretary General VHP and Prashant Hartalkar, Secretary (Int’l affairs) said that the three minor Hindu Girls i.e. Raveena (13) and Rina (15) from Ghoti District and another 16 year old girl from Badin district of Pakistan, belongs to a Meghawal Hindu community, who were kidnapped at gunpoint to a local mosque, forcibly converted to Islam and married against their will, on this past pious Holi occasion in Pakistan’s Southern Sindh Province, be released and handed over to their families immediately.

Focusing on persistent Civil rights and freedom of Hindus been violated, VHP called for the attention of Pakistani Government, its judiciary & the world community including UNHRC, to stop them forthwith.

VHP said that Many NGO’s and national and International Human Rights Groups, including Global Human Rights Defence (GHRD) and the Movement for Solidarity and Peace, have estimated that more than 1,000 Hindu girls and women are kidnapped and forced to convert to Islam annually. The Courts and legal system in Pakistan are often complicit in sanctioning this practice by accepting false documents and statements obtained through force, threats, or coercion.

Recalling the statistics VHP said that Hindus have been and still being persecuted in Pakistan. When Pakistan came into existence in 1947, Hindus were 16% of their population. But, by 2011, it drastically reduced to only 1.6%. Where did this 90% of the Hindu population gone in past about 60 years?, VHP secretary General asked. This decimation is the outcome of sustained legal, social & administrative discrimination and atrocities on Hindu ever since the creation of Pakistan, he added.

We are thankful to the present Government of Bharat for not only prompt response in the present case of these minor girls but also for its regular efforts in relaxing citizenship rules, granting long term Visas, citizenship rights and facilitating rehabilitation of Pak victim immigrants in Bharat. We are also thankful for its all-out efforts in amending the citizenship Act for protecting Hindu Victims living outside Bharat. We hope that those people who are opposing this amendment would re-think and pass it in the new Parliament. Wherever Hindus are being victimized, they naturally seeks shelter of Bharat to save their religion, dignity and life. All Hindus who are facing atrocities across the globe due to religious discrimination and willing to return back are welcome back. We will facilitate them in protecting their life & religion. 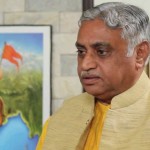