Chennai. Triplicane Bhag Karyavah Rajkumar (local unit Secretary) was brutally attacked by Muslims when he was going to his Office on November 26 at morning time. Attackers used iron rods and lethal weapons on a public road.  Luckily Rajkumar entered a house and got escaped. He was immediately taken to a Government Hospital with serious injuries at head and back.

The background of the attack is an incident of misbehavior. On 23.11.2014, around 7 p.m. near Thiruvateeswararn temple of Triplicane, Muslim youths misbehaved with a homemaker lady on the road.  The Muslim youths ran away after misbehaving. The lady ran behind them and the youth was caught by the police who were patrolling on the road. Immediately, the relatives and friends of Muslim youth numbering 50 came near the police vehicle, slapped the police vehicle with chappals and took the youth away to their home. 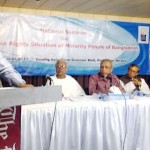