Active Participation of Swayamsevaks in the Quit India Movement

After Dr. Hedgewar ‘s death, Sangh leaders and Swayamsevaks continued expanding Sangh work with full dedication under the guidance of second  Sarsanghchalak Shri Guruji. Collective efforts of Sangh leaders under the guidance of Shri Guruji inspired many Swayamsevaks to renounce their families and work full time as Pracharaks. Those young Pracharaks were sent to different parts of the country who by their character, convincing and affectionate brotherly behaviour expanded Sangh work. Earlier, Sangh training camps were held in Nagpur only, but  now these camps were being held in almost all states. Number of Swayamsevaks and Shakhas started growing substantially. Consistent efforts, speeches/lectures resulted in formation of several teams in each Shakha working for complete freedom of India.

Growing Hindu power in the form of RSS was an eyesore for British govt. authorities and their Indian puppets. British government through one order banned wearing of military uniforms and parading by non -governmental organisations. Government undercover agencies were deployed to monitor the activities of RSS. They reported to the government that the basic aim of RSS was to fight for independence by expelling Britishers. They collected samples of speeches of Shri Guruji, Baba Saheb Apte and some other functionaries of Sangh based on the reports of intelligence agencies.

Famous historian Devender Swaroop after researching from the then intelligence agencies’ file in government archives had said; “According to the reports of intelligence agencies, Sangh activities are spreading throughout the country very fast. Training camps are being organised at 11 places. Several hundred young men after leaving the families are working whole time in different states and opening newer Shakhas. Sangh leader M.S. Golwalkar is exhorting his followers to spread the Sangh work not only in cities but in rural and distant areas too. He is calling upon people to eradicate social evils like untouchability and is asking all sections to unite.”

Similarly, in other classified report it is mentioned about growing influence of Sangh in India and its horrifying picture of anti-government activities. It is mentioned “Sangh work has spread all over India including in local principalities. It has even penetrated in government services including armed forces. This organisation is highly communal and anti-British. It is becoming more and more aggressive. M.S. Golwalkar is expanding a powerful organisation of volunteers very quickly. These volunteers or Swayamsevaks are following directions confidentially and are ready to launch any action or do the entrusted job whenever called upon. Golwalkar is very cautious, clever and above all is very resourceful.” At the end the report suggested about strictly prohibiting the daily military drills and training camps of Sangh swayamsevaks.

Sangh in the official records of National archives

Confidential files of intelligence agencies are preserved in national archive records. This report contains names of several RSS activists who were arrested for participating in Quit India movement and were punished with jail terms. These reports reveal that a place called Chumur Ashthhi in Vidarbh, RSS activists had formed interim government of independent India. These

activists were brutally tortured by British police. Around a dozen Swayamsevaks associated with that government were shot dead by police. City chief (Nagar pramukh) of Ramtek near Nagpur, Ramakant Deshpande was sentenced to death for participating in Quit India movement, even though he was later released. This is the same gentleman who later formed ‘Vanvasi Kalyan Ashram‘, an organization working for the dignity and genuine rights of the  tribals.

Groups of Swayamsevaks would pass through the streets shouting slogans in praise of Gandhiji and against British government in normal civil dress. They would reach the pre assigned place and offer arrest by breaking law. They would maintain extreme restrain and avoid confrontation with police as directed by Gandhiji.

Congress Leaders were sheltered and helped by RSS Workers

It is well known fact that communists in India did not want Britishers to leave India, in their own strategic and political interests. They were helping British spy police in arresting their patriotic adversaries. Socialist leader Jai Prakash Narayan and Congress leader Aruna Asaf Ali were provided shelter by Sanghchalak of Delhi in his house. These leaders were directing their cadre from their hiding places. Similarly, famous socialist leader Achyut Patvardhan and Sane Guruji were secretly operating from the house of Bhau Sahib Deshmukh. Famous revolutionary Nana Patil was provided shelter in the house of Sanghchalak of district of Satara, Satvalekar.

Intelligence department in their reports had mentioned that in a secret meeting of RSS on 20th September, 1943, a probable plan to be executed in case of Azad Hind Fauj’s march towards India with the assistance of the Japanese, was discussed. When Swayamsewaks were courting arrests, Shri Guruji clearly told that those who did not go to jail, should stay outside and help Satyagrah participants and their families. These Sangh workers not only helped underground coordinators and leaders of the movement but also helped their families.

Sangh’s position on Quit India movement was very clear. The then Sarsanghchalak Shri Guruji had said “We undertake a pledge that say- “I have joined RSS to seek freedom for my Hindu Rashtra.’ It shows the strong desire of Swayamsevaks to join the freedom movement. But Congress which is leading this movement, had not bothered about carrying along other organisations. It had never cared to form a joint front to free India as there were other patriotic  organisations too fighting for freedom. Even then Swayamsevaks will continue to take part in Gandhiji led Quit India movement. The fact was that it was only RSS which had a nationwide cadre of young Swayamsevaks who were committed selflessly to the country and Society. Swayamsevaks had joined the Quit India movement in their own capacity.

Based on his past experiences, Gandhiji had expected that British government would invite him for talks and he would have an excuse to call off the agitation as he had done earlier. But British government acted swiftly and arrested all members of Congress committee within 3-4 days. Government did not even give them time to deliberate or discuss anything. Congress was declared illegal party and was rendered leaderless and directionless.

According to historian Dr. Satish Mittal, “Different parties participating in freedom movement were not having similar and honest approach. Among them the most traitorous approach was that of Communist Party of India. In fact, CPI acted as an agent of British government to spy on patriotic freedom fighters. Communist party politburo and secretary of Home department had an agreement in which communist leader P.C. Joshi was appointed to help British government.

It is an undisputed fact that Congress Party did not consult any other social, religious or political party before launching Quit India Movement. On 8th August 1942, Congress unilaterally decided to launch a non-violent movement under the leadership of Gandhiji.

In this nationwide Quit India Movement, no action plan was drawn about the strategy of agitation. Nothing was planned as to who will court arrest and who will lead activists outside the jail and about sequence of agitations. There was no planning of leaderships at district and tehsil level and about meetings, mobilisations and organisational setup. The  result was that the movement fizzled out.

Why and how Britishers left our Country?

Sangh’s fifth Sarsanghchalak, K.C. Sudershan has mentioned in an article in monthly ‘Rashtra dharam’ of November, 2009 issue – “British Prime Minister Clement Attlee in whose time India got independence, came to Kolkata on his personal visit in 1965. He stayed with the then Chief Justice C.D. Chakravarty (also acting Governor) in Raj Bhavan. Chakravarty asked Attlee about why they left India when they had won the war and Quit India movement had fizzled out? He replied that Britishers did not leave because of Quit India Movement. They left India because Azad Hind Fauj had reached Imphal and Naval and Air Force had revolted.

After Quit India movement became directionless, Subash Bose prepared for a powerful blow on British imperialism with the help of Japan. Shyama Prasad Mukherjee and Veer Savarkar began working to expand Hindu Mahasabha network. Shri Golwalkar continued to work towards the goal set by founder Sarsanghchalak Dr. Hedgewar, to achieve complete freedom for undivided India. Taking our nation to the prime glory was in his mind recalling the time when Indian civilization guided the whole world in civic values about how to live peacefully in coexistence. By virtue of being a moral guide and apostle of peace, Indian Civilization had earned the status of Vishwaguru. Sangh has since strived to attain that status for our country. 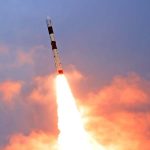 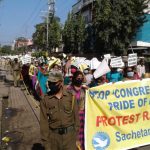