Bhagyanagar (VSK). About a thousand students, stuck in Jalandhar in Punjab, due to the Corona Lockdown, could return home safely, thanks to the efforts by the RSS swayamsevaks. A special train is taking about 600 of them to Vijayawada in Andhra Pradesh.

However, the remaining 400 students belonging to Telangana, are still awaiting their journey home as, though the Railways have agreed to send them by a special train, the Telangana Government has failed to respond so far.

These students from the Telugu states have been doing their Engineering Course in Lovely Professional University in Jalandhar. They have been thrown out of their campus as hostels were closed down due to the Lockdown on March 22 and the students have been stranded for want of transport facilities. Some of them have been provided shelter and food by the local Swayamsevaks.

When Yadi Reddy, Secunderbad RSS Vibhag Pracharak, heard about the stranded students, he immediately contacted them and got information of the plight of the 1000 students. He then contacted the Railway Minister with reference from BJP MP and President of Telangana BJP, Bandi Sanjay Kumar and Telangana BJP in charge Krishna Das. And the Railway Minister agreed to organise a special train for the students.

The Andhra Pradesh Government also responded and agreed to allow the students from that State to go to their native places. About 600 students started for AP on Wednesday and some Telangana students also started with them as there were about 60 berths vacant. The Telangana students would be disembarking at Warangal and RSS volunteers have made arrangements for their travel further.

However, unfortunately, the Telangana Government has not been responding to the plea of the Telangana students to allow them to come back home. The students who have repeatedly requested minister KT Rama Rao and others through Whatsapp and social media to no avail are still stranded in Punjab.

A medical team had carried out tests on the students at the Jalandhar railway station and allowed them to begin the journey only after ensuring that they are not infected. The students are also taking precautions such as social distancing and masks on the train. Officials at the destination station can also carry out medical tests and send the students to quarantine, if necessary, Yadi Reddy said.

The students who have been hostellers since their childhood were at their wits’ end when they were thrown out of their hostel, says Yadi Reddy and adds that the students have been having a tough time fending for themselves. It is unbelievable that the Telangana Govt has no information about these students though they have been stranded here for more than a month, he said.

The governments of both Telugu states have been overreaching themselves to bring back people stranded abroad and also to rush migrant workers out of the state but have paid no attention to students stuck in other states though they are children of this very land. 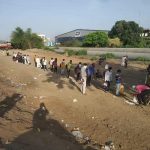