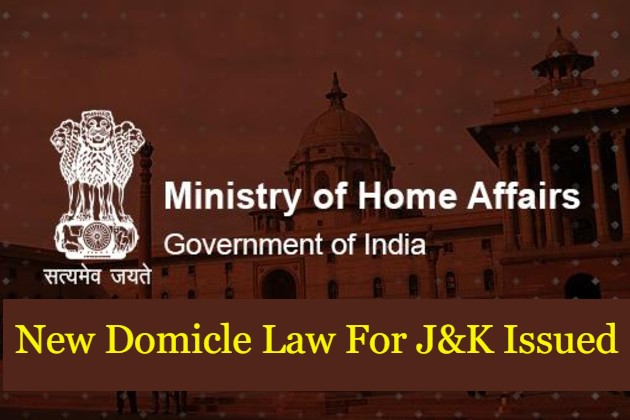 After the removal of discriminatory ArticlesĀ  370 and 35 A, a new ray of hope for those people who were facing lot of problem and miseries,due to the arbitrary and discriminatory attitude of the successive governments for the redressal of their grievances .Once again the central government under the dynamic leadership of Hon’ble Prime Minister Sh. Narendra Modi and Hon’bleĀ  Home Minister of India Amit Shah has proved again that thier working is totally different than previous governments and are committed for the welfare of the Public and resolution of the problems.

OnĀ 16-5 -2020, Department of Disaster management, Relief Rehabilitation and Reconstruction J&K issued an order for the registration of bonafide Migrants or displaced persons for the purposes of issuance of Domicile certificate.

A welcomed decision of the Union territory of Jammu and Kashmir Adminstration for registration of the bonafide displaced families who were not registered earlier by the successive governments due to unknown reasons. It is a very bold and significant step which the UT Administration has taken and it will also directly give a big relief to many unregistered displaced families who are living within J&K and other Indian States. In this order UT Administration again given an opportunity to all those displaced families and migrants who were unregistered and had approached from pillar to post in every government of erstwhile State of Jammu and Kashmir but the successive governments every time had given them fake and false assurances for thierregistration.Ironically, how the displaced persons settled outside J&K were deceited and were disowned, excluded number of times by the kashmir centric hegemony. Number of times issues related to registration of displaced families living within J&K and outside other Indian states have been taken up but no Government in the erstwhile State of Jammu and Kashmir had paid any heed to their genuine demands. It was demanded by various social and political organisations number of times that government must do an excercise and also give an opportunity for registration of all those displaced families left behind but the discriminatory attitude of successive governments never took a step to consider this geniune demands of left out displaced families. Now,this opportunity of registration for the purpose of obtaining domicile certificate shall by open only for a period of one year from the date of issuance of this order.Now therefore, in this order,The Relief and Rehabilitation Commissioner (Migrants),Jammu and Kashmir shall be the Competent Authority for the purposes of Registration of displaced persons besides Kashmir Migrants for the purpose of issuance of domicle certificates .The bonafide Migrants and bonafide displaced persons who are not yet registered with the Relief and Rehabilitation Commissioner (Migrants), Jammu and Kashmir, can apply before the Competent Authority for registration for the purpose of issuance of a domicile certificate only,with any one of the following documents, for registration:-

Copy of the electoral roll for the year 1988, showing the name of the applicant or his /her parents/grandparents. Provided that the applicant or hisb/her parents or grandparents in (i)(ii)and (iii) above includes both males and females.
Proof of working in any autonomous body or an entity fully or partially owned by the Government of Jammu and Kashmir before or after migration on 1.11.1989.
Proof of registration as a migrant or a displaced person of Jammu and Kashmir with any competent authority or Government of other States/UTs.Proof of having any documentation which would have made the person eligible to obtain a permanent resident certificate of Jammu and Kashmir before 6-8-2019. So, the central government may appeal through the medium of publications in daily newspaper and also through electronic media by issuing notification for registration of left out displaced families and all those migrants be approached and apprisedĀ  that the government of Union territory of Jammu and Kashmir has made provisions for all those displaced families and migrants who were ignored previously by the successive governments for their registration.