Chennai.  A leading hotel in the city on Sunday, October 12, cancelled its beer-drinking competition, after cadre of the Akhil Bharatiya Vidyarthi Parishad warned the management to call off the event, saying it was illegal to promote alcohol.

RadissionBlu, Egmore, had announced the competition ‘Octofiesta – Drink Up,’ with a promotional poster “Calling all beer lovers to team up in groups of five and drink up at the beer drinking relay” between 12 noon to 2 pm on October 12. The registration fee for each group was Rs 2,500.

On Sunday, things took a surprise turn when the ABVP, which is spearheading a campaign demanding total prohibition in the State, warned the hotel management against holding the competition. “On receiving information from our cadre about the competition, I called up the hotel manager and warned him of serious consequences if it is not dropped,” said Kalyan Raman, An activist.

Kalyan Raman told Express that it was illegal to promote alcohol. “While the hotel may have licence to sell it, it does not have legal sanctity to promote it,” he said adding that the ABVP conveyed its stand to the hotel’s general manager, when he claimed that it was merely a beer-selling programme.

Meanwhile, ABVP cadre, led by its president Muthuramalingam, gathered before the hotel with flags, ready to storm the premises, if necessary.

The hotel management then called the police and assistant police commissioner, Egmore, and inspector Mathiarasan tried to defuse the situation through talks. “We explained to the police that the hotel’s action was illegal and, hence, they must stop it,” said Kalyan Raman. “We also sent an SMS complaint to the inspector, seeking action against the hotel.”

Following a directive by the police to cancel the event, the hotel was finally forced to call off the competition. When contacted, the hotel’s bar manager Jagadish confirmed the cancellation of the beer-drinking competition, but refused to go into details. 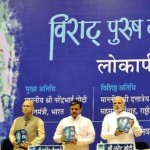