Hubbali. Large number of Muslim mob allegedly went on a rampage damaging many police vehicles, a nearby hospital and a Hanuman temple in the old town of Hubballi and injured some police officers on duty over a social media post.

“Around 84 people have been arrested and some FIRs have been registered. Twelve of our officers on duty were injured and some police vehicles were damaged. We have taken all precautionary measures so that such incidents do not occur again. We will not spare those who have taken law into their hands,” Hubballi-Dharwad Police Commissioner Labhu Ram told media.

Someone had posted a social media post, which others took objection to and lodged a police complaint. Subsequently, the person was arrested after a case was registered.

Not satisfied with the action, some people started gathering around the police station. They were persuaded and later dispersed from the spot.

Around midnight, a large number of people once again started gathering around the police station, the officer said, adding that their leaders were summoned to the station and apprised about the action taken so far.

The mob outside the station was not ready to listen to them and they went on a rampage. As an effort to disperse the mob, the police resorted to lathi-charge but the mob went berserk then police used tear gas shells and dispersed them.

A stone-pelting incident took place at Old Hubbali Police Station. Labhu Ram adding that the mob damaged police vehicles as they resorted to stone pelting. In this incident, about a dozen police officers have sustained injuries.

The police commissioner said, “We will not spare those who took law into their hands. We have taken all preventive measures to stop repetition of such incident, Section 144 was imposed in the entire city and the situation is under control,”

A police officer is in a serious condition. Some people involved in the attack have been arrested. It was a pre-planned attack. The miscreants wanted to create Devara Jeevanahalli and Kadugondahalli like incident in Hubballi,” Home minister Jnanendra said.

The Home Minister was referring to the 2020 riot in Bengaluru where about 4,000 Muslims set on fire the residence of Congress MLA from Pulakeshi Nagar assembly constituency in Bengaluru R Akhanda Srinivas Murthy and his sister over a social media post by his relative. 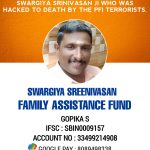