On the 21st of April five days have passed by since the Palghar incident. It has been three days since the incident came to light on social media and two days in the media. During these eight days, a lot of things happened, there were reactions, it involved politics. But, some facts have come to the fore on this occasion. So whether the Palghar massacre is a rumored mob lynching or a plot to kill saffron-clad saints, such doubts about it have begun to arise.

In Gadchinchale village near Kasa village in Palghar district, where three sadhus were killed by a mob, the sarpanch of the village was from BJP and doubts like whether BJP was behind the event started arising. But, was the sarpanch there a person with a notorious hooligan tendency or of a big stature such that the people in that area would never act without his/her directions? This simple question shows us how ridiculous this claim is! When did the Sarpanch become so powerful?

A woman named Chitra Chaudhary is the sarpanch and this is probably the first time she has been the sarpanch. Meanwhile, Chitra Wagh has been arrested by the police and many of those arrested belong to the BJP, ‘so the BJP has a hand in this’, claimed Congress spokesperson Sachin Sawant along with Shiv Sena. On the other hand, Chitra Chaudhary, along with her family, has been receiving death threats, on suspicion of protesting against the killing of the monks and later revealing the names of the accused arrested by the police. She sought for police protection on getting such death threats.

In another case, BJP leaders said that NCP Zilla Parishad members and Panchayat Samiti members were present at the spot. It is said that these people can be seen in the video and hence were present at the scene when the saints were being killed. Some Communist Party leaders, including Subhash Bhavar, Dharma Bhavar, and Vishnu Patra, are also said to be involved in the killings. The allegations of the political parties will continue. But, the facts in this case cannot be ignored. Every effort has been made to suppress this case.

News of the incident has started circulating in the media after three days of increasing pressure on social media. If there was no social media, no one would have got this news. Local residents say thousands of people gathered when the incident happened. The population of Gadchinchale is around 1500. It is also understood that people from nearby villages came to the spot. This proves that the rumor was serious. Therefore, there remains a suspicion that this was a murder carried out through mob lynching.

According to media, even though these monks were killed by rumors that they were kidnappers or robbers, it cannot be ruled out that someone may have deliberately spread the rumor. Although the Congress, NCP and Shiv Sena have claimed that the BJP has a foothold in the area, it is true that the Communists have influence in the area. Congress, NCP and three times Communist Party MLAs have been elected here since 1962. Vinod Nikole, the current MLA of Dahanu, is also an MLA of the Communist Party. In 2014, the BJP won this constituency for the first time. The sarpanch of the group gram panchayat belongs to the BJP, so if someone is saying that this is the stronghold of the BJP, then one can wonder how baseless is his claim!

In fact, Those who have ruthlessly killed Saffron clad sadhus must be severely punished. However, it should also be ascertained whether the deceased has been targeted because he is a Hindu sadhu. It is unbelievable that such rumors are spread during the lockdown and thousands of people gather. The astonishing fact is that two police vehicles had arrived at the spot and a full contingent of police was at the spot and the murder took place before them. It should come to the fore that the Maharashtra Police, which is being appreciated everywhere today, had no control in this place.

The area is heavily influenced by Christian missionaries, converts, and communists. This fact is evident by the number of churches in the Dahanu area. It is but obvious that then the questions and doubts arise, ‘whether the killing of sadhus in this place’ has anything to do with it. Maybe, this type of mob lynching would’ve been caused by rumors and fears. Today we can just doubt and have reasons based on logic. Any form of murder or violence is bad, but the motive or the intention behind it can be even worse. Future events of violence can be prevented if the intentions are realized. Hence, I had to pen down such an essay. Today the truth is in the bouquet, let’s believe it will come true tomorrow. 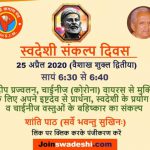