Kerala (VSK). Kerala Governor has made it clear that his appointees cannot criticise him. He was obviously referring to the unacceptable statements of Kerala ministers and Vice Chancellors who keep on belittling him before media.

He told the media persons he would not address ‘masked cadre media’. This time he appeared to be referring to CPM-controlled Kairali channel and Jamat-e-Islami’s Media One. He asked their correspondents to leave the place.

He pulled LDF regime’s legs stating that they do not have confidence in their Law Department and Advocate General. That is why they shed Rs 49 lakhs for bringing senior lawyers from Supreme Court to argue against him (Governor).

He did not mince his words when he referred to the weak law and order situation in the state.

He blamed, some people in the government try to control Raj Bhavan. Government will have to answer the questions people ask. He referred to controversial letters Thiruvananthapuram City Mayor Arya Rajendran and Corporation Council CPM Parliamentary Party Secretary D. R. Anil sent to CPM district secretary seeking the list of (party) nominees to fill the temporary vacancies, likely to be permanent after some time, under Thiruvananthapuram Municipal Corporation. Governor said, government would have to answer questions regarding Mayor’s letter and similar other letters.

They are answerable about university appointments also.

Answering a question, he said, he would reply the VCs after getting their communications.

One thing is clear, Governor is determined to fight the undesirable and unacceptable policies and actions of the Pinarayi regime. 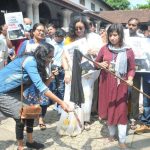