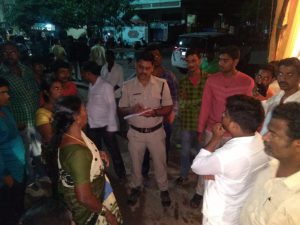 A mob of around 70 Muslims attacked women performing puja and vandalised the Ganesh pandal at LB Nagar in Warangal, Telangana on 6 Sept. Around 8 pm, the Muslims mob trespassed into Ganesh Pandal with footwear and started abusing devotees who were peacefully performing puja by singing keertans. This unruly mob particularly targeted women devotees and organisers of the pandal. In this, Smt Radamma, who belongs to scheduled caste was severely injured in her neck. Sri Narender, a member of organising team was also critically injured when tried to pacify this fanatic Muslim mob.

Ambedkar Youth Association, the organisers of said Ganesh pandal who belong to Schedule Caste, alleged that this is a deliberate and well planned attack by Muslims and a violation of their fundamental rights of religious freedom.

The locals accused that the Muslim mob was lead by Salman was well planned and executed to disturb religious harmony. Instead of of registering a case against the Muslim mob, the local police is making pressure on victims to withdraw their complaint, alleged organisers of the Ganesh pandal.

Colony residents, members and representatives of various Hindu Organizations like VHP demanded that government and police should take immediate action on the culprits and to provide security to Ganesh pandals.

Last year, a Pujari Satyanaraya Sarma was murdered by an Imam for performing puja at his Temple.