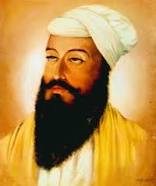 Guru Tegh Bahadur Sahib Ji is the ninth Guru of the Sikhs. He was the youngest son of Guru Hargobind Sahib Ji. He was born on April 1st, 1621 at Amritsar. His mother was Bibi Nanki Ji. His birth name was Tyag Mal but keeping in view his courage and bravery, he was named Tegh Bahadur. At the time of his eternal rest, Guru Har Krishan Sahib Ji bowed down saying, “Baba Bakale” ie. My successor is at Bakala.

The Mughal Emperor, Aurangzeb, attempted to consolidate Bharat into one Islamic nation. In order to achieve this aim, he set out to virtually eliminate Hinduism from India. When the ninth Guru Ji heard of this from a desperate group of Hindus, he challenged the Emperor that, in order to convert all the Hindus, the Guru himself would have to embrace Islam. He offered to sacrifice everything for the cause of righteousness. As a result the Guru was imprisoned at the request of Aurangzeb in 1675, Five devout Sikhs who accompanied the Guru were arrested and martyred in front of Guru Tegh Bahadur Sahib Ji at Delhi.

Despite being forced to watch the torture and execution of these disciples, the Guru Ji simply refused to concede to the Emperor’s demand. The Emperor Aurangzeb gave Guru Tegh Bahadur Sahib Ji three options.

Finally, the Guru preferred the latter. His head was chopped off publicly at Chandni Chowk in Delhi on November 11th, 1675 for being a protector of fundamental human rights. Unparalleled in the history of humankind, the martyrdom of Guru Tegh Bahadur Sahib Ji was an act of sacrifice for another religious community. The Guru Ji’s martyrdom served to awaken the collective conscience of the Sikh community, which was about to undergo a final transformation in the years to follow.

The headless body was taken away by Bhai Lakhi Shah Vanjara Ji who cremated it respectfully at his place in Delhi on November 12th, 1675. Gurdwara Rakab Ganj Sahib Ji was erected at this location to commemorate the incidence. The Severed head of Guru Tegh Bahadur Sahib Ji was then presented respectfully to, Guru Gobind Singh Ji by Bhai Jaita Ji at Sri Anandpur Sahib Ji in Punjab. Gurdwara Sis Ganj Sahib Ji has been erected inside the town of Anandpur Sahib Ji where the severed and revered head of the Guru Ji was cremated. 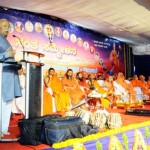