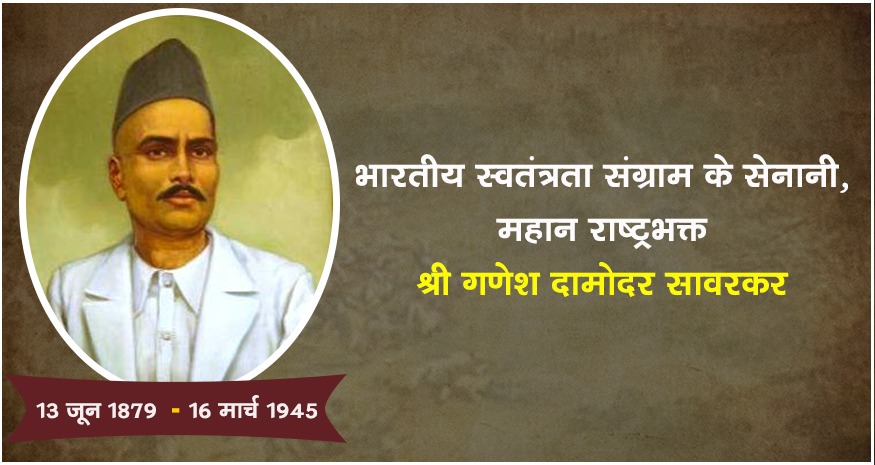 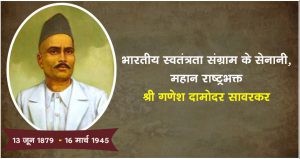 Today is birth anniversary of Swatantryaveer Vinayak Damodar Savarkar’s one of the biggest source of inspiration i.e. his elder brother, a true revolutionary nationalist, Founder of Abhinav Bharat and a great scholar of Indian philosophy Ganesh Damodar Savarkar alias Babarao Savarkar. He was the eldest son in Savarkar family born on June 13, 1979 followed by Vinayak, Mainabai and Narayan.

It was the dawn of Revolutionary Movement for Indian Independence. Destiny had put a big challenge before Babarao Savarkar as he had to shoulder the responsibility of his three siblings at a very early age due to death his parents – Damodarpant and Radhabai. At the same time his soul was ignited with revolutionary thoughts and intense anger against the British. In his early childhood, he did an extensive study of Ayurvedic medicines, astrology, Yoga, Indian Philosophy and Hindu religion. His revolutionary Work started when he joined the secret organisation namedRashra Bhakta Samuh founded by Vinayak Savarkar and his friends in 1899. On the very first day of 20th century i.e. on January 1, 1900 Babarao formed ‘Mitramela’ to awaken the youth for national movement.

At that time Lokmanya Tilak’s movement against British was in full swing which proved to be the biggest inspiration source for Babarao Savarkar. Nasik, where Babarao and Tatyarao (Vinayak) had sowed the seeds of the revolutionary movement, was soon recognised as the Centre for National Movement. The movement got a big structure in the year 1904 with the foundation of ‘Abhinav Bharat’ – an organization of dedicated youth demanding ‘absolute freedom for India’. Babarao played a big role in the foundation of this organization. Besides, he also played a leading role in the foundation of Atmanishtha Yuvati Sangh – an organisation of dedicated women aspiring to take part in the freedom movement. Thus, Babarao was a skilled organizer who laid a strong foundation of the movement. Babarao, along with his friends run a big campaign of boycott on British goods.

In the year 1909 British arrested Babarao when he was in Mumbai and sentenced him to life-imprisonment and took him to Andaman jail. It intensified the unrest among the freedom fighters and just after 5 months, Abhinav Bharat Members Anant Kanhere, Anna Karve and Vinayak Deshpande killed Jackson, the main British officer responsible for Babarao’s imprisonment. Indians protested his imprisonment in all possible ways.

However, Babarao had to suffer a miserable life in jail as the cruelty of British officers had no limits. After the rescue in 1922, despite being physically stricken, he carried on the task of awakening Indian youth till his last breath on March 16, 1945.

One thought on “Tribute to Indian Revolutionary”