Post independence, in the erstwhile State of J&K, now union territories of J&K and Laddakh, all governments were lead by Kashmir centric leadership and all of them proved to be dacoits themselves; where terrorism was nurtured & incentivized by the respective rulers, where land encroachers were rewarded with ownership on encroachments, where ruling dacoits were controlling investigating authorities, it was a free for all situations till 5th August 2019. With the creation of union territories of J&K and Laddakh; and with the introduction of laws required to curb the malpractices of the beneficiaries, and with investigating agencies & public prosecutors becoming responsible while presenting the facts; results have started pouring in.

J&K High Court, while declaring the infamous ‘Roshni Scheme’ (popularly known as ‘Roshni Scam’), as invalid and illegal; have entrusted its further investigation to CBI. With this, general public of J&K is hoping for the retrieval of all the state land, and also legal remedies for conspirators and beneficiaries.

In 2001, the then government of J&K, announced with much hype, a self proclaimed revolutionary, mother of all schemes (scams), aimed (publicised) to generate a revenue of Rs. 25,000 crores to be used to set up hydro power projects in J&K (which actually generated only less than Rs.100 crores), by giving ownership of State land under illegal occupation of encroachers. For the first time in the history of India, there was a scheme for land encroachers, with a message to honest citizens, that they are fools. The Rules of the Act, illegitimately, were amended at the whims and fancies of people in power multiple times, by all major Kashmir centric politicos till 2007 to include their supporters and kins as beneficiaries. As detected by Comptroller & Auditor General of India in the year 2013, in a deep contrast between Jammu & Kashmir regions, ownership rights of approximately 33,000 kanals of state land were vested to state blessed encroachers in 10 districts of Kashmir province but around 6 lacs kanals of land (around 20 times that of Kashmir province) was regularized in favor of encroachers (with a sizeable number belonging to different districts of Kashmir region) in 10 districts of Jammu province. In Kashmir 100% of the beneficiaries were Muslims as Hindus stands forcefully expelled from the region but surprisingly in Jammu province where Hindus account for 75% of the population, they comprised of less than 10% of the beneficiaries.  Hon’ble High Court’s order  for a conclusive investigation into all aspects of this scam by CBI, along with strictures on modus operandi of investigation agencies of erstwhile state of J&K, with directions to the U.T. Government to extend all cooperations to CBI for their investigation processes has raised hope among law abiding citizens of J&K U.T., who were earlier treated as children of lesser God.

Kashmir centric leadership of J&K comprising all political parties who later joined hands with their self proclaimed ‘Gupkar Declaration’ have not only collided for land jihad for demographic change of J&K, but have one common agenda of harbouring and nourishing anti national agendas by acknowledging the stands of enemy nations like Pakistan & China, and time and again singing their tunes. One Gupkar Declaration leader Farooq Abdullah recently sought China’s intervention in J&K, with whom our brave soldiers are fighting in Ladakh; and his other colleagues on same platform belonging to Gandhi/ Azad’s Congress & Mufti’s PDP have probably given silent approval.

These leaders are not only the enemies of secularism and the country but are also a blot on much publicized Kashmiriyat. A noted columnist Madhu Kishwar has recently revealed that how these likes of Abdullahs were employing Kashmiri girls in State Administration for ulterior motives. All of them, be it Abdullah’s or Mufti’s or Gandhi’s or Azad’s or Lone’s or Hurriyat representatives, have adopted a criminal silence on the expose.

Law abiding citizens are looking towards retrieval & restoration of state land, end to land jihad, end to demographic changes, end to terrorism and restoration of pride of all citizens post abrogration of Article 370 the process for which has initiated by Hon’ble High Court of J&K. 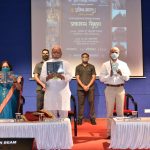