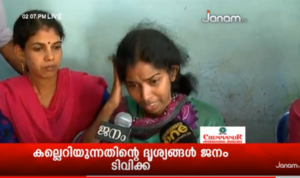 “How can a chief minister be so insensitive and tell lies in front of the media? My father was killed by CPI (M) goons who pelted stones from their party office. He has not died of any heart attack. One portion of his head was scattered when bricks thrown by the goons hit his head. Even before the post-mortem report came, how can a chief minister say he died of heart-attack without any qualms. You are a murderer and you will kill all,” said Akhila, the daughter of slain Chandran Unnithan, with tears rolling down her cheek. He was a worker of Sabarimala Karma Samithi.

According to the family members, Unnithan, a farmer was pained by the entry of Maoists in Sabarimala temple. He could not reconcile with the fact that Sabarimala would be allowed to be defiled by the government. He was a small-time farmer and a staunch devotee of Lord Ayyappa.

Unnithan’s wife Vijayamma said the police and CPI(M) goons killed her husband who was a poor man with no enmity towards anyone.